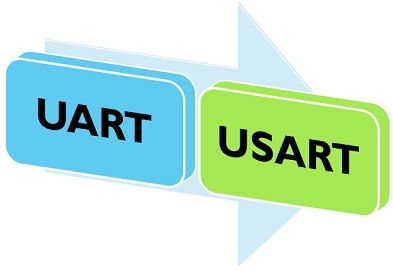 These peripherals – USART and UART are mainly used as the auxiliary device with the microcontrollers for translating the ingoing and outgoing bytes of data in the form of a serial stream of bits.

The acronym USART expands to Universal Synchronous/Asynchronous Receiver/Transmitter. It is an integrated circuit which is attached to various communication devices. These are capable of transforming the parallel data in the serial form. The data rate of USART is generally high because it generates clocked data (i.e, synchronous clock generation). USART is capable of conducting the whole process in the reverse order where serial data is injected, and the parallel form of the data is produced as a result.

Key Differences Between USART and UART

How is USART different from UART?

USART is kind of an enhanced version of UART with more capabilities. It is capable of producing clocked data which makes it operable at greater baud rates. The main reason behind this is that the USART has the features of UART, but it also has a synchronous clock.