On the other hand, the scheduling which takes place when a process terminates or switches from running to waiting for state this kind of CPU scheduling is called Non-Preemptive Scheduling.

Let us discuss the differences between the both Preemptive and Non-Preemptive Scheduling in brief with the help of comparison chart shown below.

Preemptive scheduling is one which can be done in the circumstances when a process switches from running state to ready state or from waiting state to ready state. Here, the resources (CPU cycles) are allocated to the process for the limited amount of time and then is taken away, and the process is placed back in the ready queue again if it still has CPU burst time remaining. The process stays in ready queue till it gets next chance to execute.

Let us take an example of Preemptive Scheduling, look in the picture below. We have four processes P0, P1, P2, P3. Out of which, P2 arrives at time 0. So the CPU is allocated to the process P2 as there is no other process in the queue. Meanwhile, P2 was executing, P3 arrives at time 1, now the remaining time for process P2 (5 milliseconds) which is larger than the time required by P3 (4 milli-sec). So CPU is allocated to processor P3. 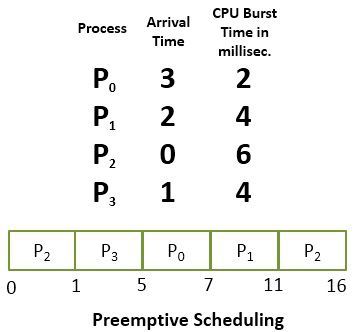 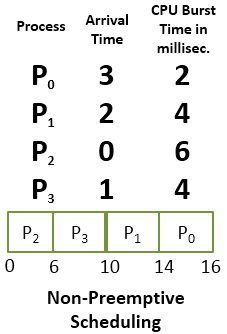 Let us solve the above scheduling example in non-preemptive fashion. As initially, the process P2 arrives at time 0, so CPU is allocated to the process P2 it takes 6 milliseconds to execute. In between all the processes i.e. P0, P1, P3 arrives into ready queue. But all waits till process P2 completes its CPU burst time. Then process that arrives after P2 i.e. P3 is then allocated the CPU till it finishes it’s burst time. Similarly, then P1 executes, and CPU is later given to process P0.