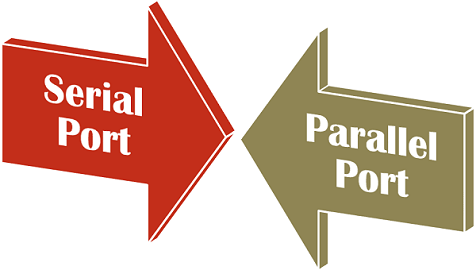 Before understanding each type of port individually, we must be aware of what a port is? A port is a docking point with the help of which the various devices can be linked to a computer or other devices. There is a huge significance of these ports because, without it, the computers cannot be used at its maximum. It facilitates in creating communication between the devices and the CPU.

As mentioned above that the serial port is an interface used for attaching the serial lines where the serial communication can be attained. In these ports a 9-pin D shaped connector can be docked which connects to the transmission line. As we know that the serial transmission obtained by a single wire and only a single stream of a bit is transferred from one end to the other end. So, like parallel transmission, there is no data speed mismatch problem. Therefore, the wire length can be extended as required. The below-given diagram shows the DB-9 pin.

The serial ports follow the RS-232C or RS-422 standards. We have been using this technology for 20 years, and it is still used in several places.

There are several applications of the serial port and serial communication where these are mainly implemented in the dial-up modems, mouse, plotters. Nowadays, these are used with the security cameras also.

Unlike serial port, the parallel port can transfer a set of 8 bits at a time over the eight isolated wires. This is why it is faster than serial communication. It uses a 25 pin connector called DB connector. The biggest limitation of parallel communication is that all the bitstreams needed to transfer the data at the same speed to eliminate the errors and crosstalk. But, producing the same speed for transmission by all the bitstreams is quite impractical. Hence, due to this reason, the transmission lines in parallel communication are preferred to be shorter. The following diagram shows the DB-25 pin.

The parallel ports conform the IEEE 1284 standards which provides faster bidirectional parallel (dataflow) communication. The various types of connectors employed in the technology are DB-25, Centronics and mini-Centronics. Centronics is a 36 lines parallel interface that utilizes the metal clips mounted into a cell and used for mainly connecting the printers which is depicted in the diagram shown below.

Earlier, the parallel ports were used with printers only, but nowadays it is implemented with scanners, zip drives, CD-ROM drives, hard drives, etcetera. All the latest technology devices are equipped with one port known as SCSI port, and these ports are used for adding the external devices.