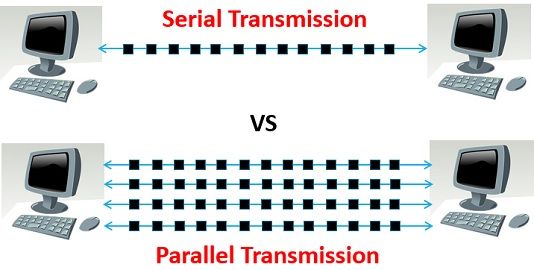 In Serial Transmission, data is sent bit by bit from one computer to another in bi-direction where each bit has its clock pulse rate. Eight bits are transferred at a time having a start and stop bit (usually known as a Parity bit), i.e. 0 and 1 respectively.

For transmitting data to a longer distance, serial data cables are used. However, the data transferred in the serial transmission is in proper order. It consists of a D-shaped 9 pin cable that connects the data in series.

In Parallel Transmission, various bits are sent together simultaneously with a single clock pulse. It is a fast way to transmit as it uses many input/output lines for transferring the data.

Furthermore, it is advantageous because it conforms to the underlying hardware also, as the electronic devices like computer and communication hardware uses parallel circuitry internally. This is a reason the parallel interface complements the internal hardware well.

The installation and troubleshooting is easier in parallel transmission system due to its placement in a single physical cable. Parallel Transmission uses a 25 pin port having 17 signal lines and 8 ground lines. The 17 signal lines are further divided as

Despite the speed of the data, the parallel transmission has a limitation called skew where bits could travel in quite different speeds over the wires.