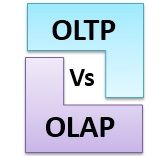 There are some other differences between OLTP and OLAP which I have explained using the comparison chart shown below.

OLTP is an Online Transaction Processing system. The main focus of OLTP system is to record the current Update, Insertion and Deletion while transaction. The OLTP queries are simpler and short and hence require less time in processing, and also requires less space.

The best example for OLTP system is an ATM, in which using short transactions we modify the status of our account. OLTP system becomes the source of data for OLAP.

OLAP is an Online Analytical Processing system. OLAP database stores historical data that has been inputted by OLTP. It allows a user to view different summaries of multi-dimensional data. Using OLAP, you can extract information from a large database and analyze it for decision making.

OLAP also allow a user to execute complex queries to extract multidimensional data. In OLTP even if the transaction fails in middle it will not harm data integrity as the user use OLAP system to retrieve data from a large database to analyze. Simply the user can fire the query again and extract the data for analysis.

The transaction in OLAP are long and hence take comparatively more time for processing and requires large space. The transactions in OLAP are less frequent as compared to OLTP. Even the tables in OLAP database may not be normalized. The example for OLAP is to view a financial report, or budgeting, marketing management, sales report, etc.

Key Differences Between OLTP and OLAP

OLTP is an online data modification system while OLAP is an online historical multidimensional data retrieval system, which retrieves the data for analysis that can help in decision making. Which one to use depends upon the users requirement both works for different purpose.