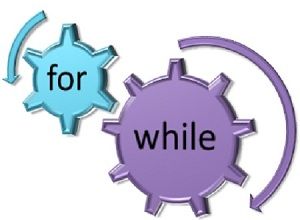 There are several ‘for’ loop variations in C++ are implied to increase its applicability, power and flexibility. For example, the for loop allows us to use more than one variable inside the loop in order to control it, and the use of converge function with ‘for’ loop. Conversely, with while loop we can not use many variations, that must be used with the standard syntax.

There are some major differences between for and while loops, which are explained further with the help of a comparison chart.


Definition of for loop

In Java, there are two forms of for loops. The first form is “traditional” form and the second is “for-each” form.

The general form of traditional for loop statement.

In Java, the initialization statement and the iteration statement may include more than one statement. Each statement is separated by other by a comma, in Java, a comma is a separator whereas, in C++, “comma” is an operator that can be used in any valid expression.

for-each loop and its syntax

The “for-each” form is an enhanced for loop. The general form of the for-each loop is as follow.

There are various types of collection used with for loop. Let’s discuss it with an array as a collection.

Here, ‘c’ is an iteration variable; it receives the values from array[ ], one at a time, from the lowest index to the highest index in the array. Here, the loop iterates until all the elements of the array are examined. It is possible to terminate the loop in between by using “break”. However, the change in the iteration variable does not affect the array, as it is only a read-only variable.

Definition of while loop

The declaration of a while loop is as follows

Let’s discuss the working of a while loop. In the example below the code will print from 1 to 10.

Like ‘for’ loop, the ‘while’ loop can also initialize the control variable at the top of the loop i.e. during condition checking.

Here the control variable ‘ch’ is initialized, and the condition of the loop is verified at the top of the loop.

May it be a for loop or a while loop, if there is only one statement in the body of the loop, the curly braces are not required in that condition.

Key Differences Between for and while loop