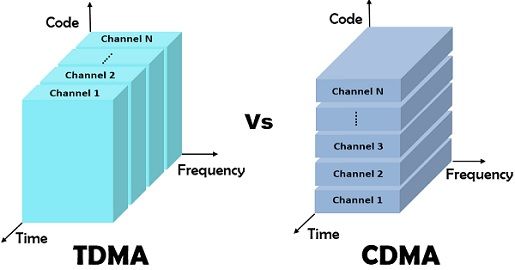 The designing and standardizing of the cellular systems involve the selection of the multiple access method. Basically, there are three types of multiple access schemes that are TDMA, FDMA and CDMA. In this article, we are going to differentiate between TDMA and CDMA. The significant difference between TDMA and CDMA is that TDMA permits the user to share the channel based on the time slots whereas CDMA distribute the channel by code.

TDMA expands to Time Division Multiple Access which is a technique for voice-oriented networks such as cellular and PCS (Personal Communication Services). It is used for allocating the resources on the predetermined basis to the users for a particular interval. The time is an important entity in this technique because the same frequency band distributed between the several users on the basis of time.

The TDMA technique is founded on the TDM (Time Division Multiplexing) commonly used in the trunks of the telephone system, we have discussed TDM in the previous article, the difference between TDM and FDM. Now, how does it works? The first operation is performed by the time controller where the time slots are allocated to the users until the user releases it. At the receiver end, the TDM synchronizes the signal frame and retrieves the designated slots from the TDM. Synchronization is an important part of the TDMA.

In the older technologies, FDMA is more popular and used in the 2G networks, which is later replaced by the TDMA technology. TDMA carries out hard handoff where the call of the user moving from one cell to other, drops and immediately connected to the network the is user travelling.

CDMA (Code Division Multiple Access) is a combined technique of the TDMA and FDMA where the resources are allocated on the basis of frequency as well as time. In FDMA the frequency band is divided among the more than one user for the whole session. While TDMA allows each user to utilize the entire band of frequency but for a fixed session. However, CDMA uses the features of both the techniques, where numerous users simultaneously use the same frequency band that is distinguished by a code.

These codes are chosen, so that if the code is used second time the user knowing the code can detect that specific user among the various users. This technique is highly susceptible to noise where each user is a source of noise for the receiver which makes it limited for a certain number of users. Because as the number of the user increases the amount of noise also increases; as a result, the system can be collapsed.

Key Differences Between TDMA and CDMA

The bandwidth efficiency offered by CDMA is extremely higher than the TDMA. CDMA is more secure, robust, and cover a more extensive area, but when it comes to battery life of the devices the TDMA provides higher battery life because it does not transmit data continuously while CDMA constantly transmits the data.