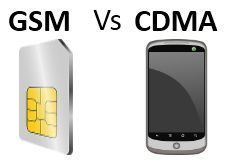 In this article, we are going to discuss the two popular technologies that provide multiple accessibilities to a channel GSM and CDMA. The basic difference between GSM and CDMA is that GSM is specific to a SIM card that is used with the mobile phone.

On the other hands, the CDMA is handset specific. Let us discuss some more differences between GSM and CDMA in the comparison chart shown below.

GSM (Global System for Mobile communication)  is a standard that forms the basis for 2G. GSM mobile phones are divided into a handset and a removable SIM (Subscriber Identity Module) card. SIM contain all the information about the user of it. You can fix this remove able SIM in another handset to activate it using the same identity.

The technology used in GSM  is TDMA and FDMA. In TDMA a multi-user access is provided by slicing the channel into different time slices. In FDMA multiple user access is made possible by separating the frequencies in the channel. As GSM is used and accepted worldwide, there is no problem of Roaming in GSM mobile phones.

CDMA (Code Division Multiple Access)  is a technology that forms the basis of 3G mobile phones. In CDMA there is no removable SIM. The entire information about the user and the account is stored in the internal memory of the device or handset.

Ther is a physical medium, and each device has been given a specific code. The network stations transmit entire frequencies over all the times. The particular device or handset is identified by the code theory in the network. The data transmission rate is faster as CDMA uses EVDO which serve faster data bandwidth.

Key Differences Between GSMA and CDMA

It depends on for which option (GSM and CDMA) you should go. GSM and CDMA both are unique technologies.