3G and 4G technology are associated with mobile communication standards. Mobile Communications is one of the constantly developing areas to deliver faster and better mobile broadband experiences. Each new technology offers the significant advancement in performance and capabilities compared to its predecessor. It provides the ability to access the internet over different devices like tab, laptop, desktop and mobile phones.

3G is a generation of standards for mobile telecommunication services that satisfies the International Mobile Telecommunications -2000 (IMT-2000) provides the ability to transfer voice and data (music downloads, emails and instant messaging) over the same network simultaneously.

3GPP (3rd Generation Partnership Project) was evolved during formation of governing bodies which included the collaboration of both GSM and UMTS. 3GPP was working under observation of ITU-R (International Telecommunication Union-radiocommunication sector) one of the sectors of ITU.

It is responsible for managing the international radio frequency spectrum, to ensure the efficient use of spectrum and defines technology families, associates specific parts of the spectrum with the families.

ITU finally ratified a family of five 3G standards which are part of the 3G framework known as IMT-2000, after trying to build a single 3G standard:

It is an extension of 3G technology which provides capabilities defined by ITU (International Telecommunications Union) in IMT (International Mobile Telecommunications) includes features like scalability, flexibility, efficiency, self-governance, security to support interfacing with different types of networks and a multitude of new and existing services.

It offers completely converged customised services (voice, data and multimedia) at data rates of up to 100 Mbps and pervasive mobile access for:

Versions of Mobile LTE (Long Term Evolution) and WiMAX (Worldwide Interoperability for Microwave Access) in unison support much less than 1 Gbit/s peak bit rate, are branded 4G by service providers, but there is no complete IMT-Advanced compliance.

The main goal of 4G LTE was to achieve high mobility and global connectivity.

The IP Core network is developed further to support high data rates, advanced application services and management of IP and radio network more efficiently and has much more exacting requirements.

The spread spectrum radio technology which was used in 3G is replaced by:

As a result, it transfers very high bit rates without being affected by immense multipath radio propagation.

The  points covered below presents the difference between 3G and 4G technology:

The Constituent parts of 3G UMTS network are

• Mobile Station: It could be anything like data and voice-enabled mobile phones, tabs or computers which could be used as an end user.

• RAN (Radio Access Network): It consists of base stations and radio access controller which bridges the gap between Mobile Station and Core Network. It also controls and manages the air interface for the whole network.

• CN (Core Network): It provides the main processing and management of subsystems. The 3G UMTS network Architecture is migrated from GSM with some enhancements in core network elements. 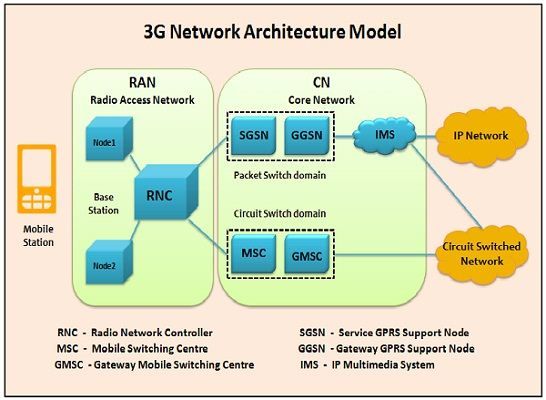 The Constituent parts of 4G LTE network are 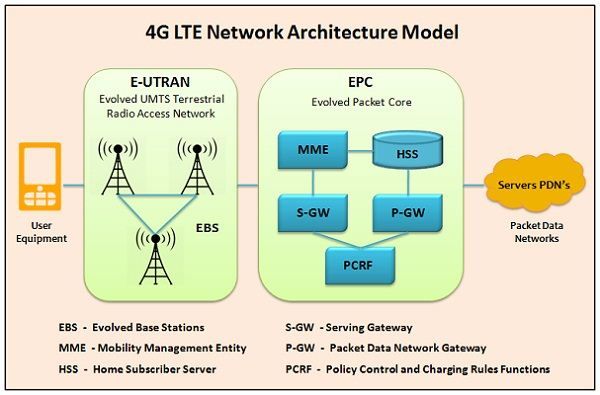