TCP/IP and OSI are the two most widely used networking models for communication. There are some similarities and dissimilarities between them. One of the major differences is that OSI is a conceptual model which is not practically used for communication. On the other hand, TCP/IP is a model used for establishing a connection over the network.

The OSI model mainly emphasises the services, interfaces and protocols. Conversely, the TCP model is not able to distinctly describe these concepts.

Note: The TCP/IP enables only connectionless communication mode in the network layer. But both modes (Connectionless and connection-oriented) are in the transport layer.

We will discuss some more differences in the content ahead.


What is TCP/IP MODEL?

TCP (Transmission Control Protocol)/IP (Internet Protocol) was developed by the Department of Defense (DoD) project agency. Unlike OSI Model, it consists of four layers each having its own protocols. Internet Protocols are the set of rules defined for communication over the network.

We consider TCP/IP as the standard protocol model for networking. TCP handles data transmission and IP handles addresses. The TCP/IP protocol suite has a set of protocols that includes

It is a robust and flexible model. The TCP/IP model is mostly used for interconnecting computers over the internet.

The layer act as an interface between the host and the network hardware. It specifies what operation must links (such as serial links) and classic ethernet perform? So that they can satisfy the requirements of a connectionless internet layer.

The layer enables the host to transmit the packet over the network independently. The packets may arrive to their destination in a different order. It is the responsibility of the higher layer to rearrange them in proper order. The layer defines a packet format and the protocol such as:

It enables a fault-free end-to-end delivery of the data between the source and destination. The data is in the form of datagrams. The protocols defined by this layer are:

The layer permits users to access the services of global or private internet. The various protocols described in this layer are:

What is of OSI Model?

OSI (Open System Interconnection) model was introduced by ISO (International Standard Organization). The model relies on the concept of layering and has a vertical set of layers, each having different functions. It follows a bottom-up approach to transferring the data. It is robust and flexible, but not tangible.

The main intent of the OSI reference model is to conduct the design and development of digital communication hardware. It also defines the designing of software in a way that it can efficiently interoperate.

OSI model consists of seven layers as described below:

The layer enables users to access the network by using interfaces and services. Such as electronic mail, shared database management, file access/transfer and other services.

The layer focuses on the syntax and semantics of the transmitting information. It performs tasks such as translation, encryption and compression. The layer encodes the actual information into bit streams. It is then converted into another form and compressed.

The layer establishes the session between different machines. It is also responsible to synchronize and maintain the interaction between them. The services provided by the layer are dialog control, token management and synchronization.

The layer accepts the data from its preceding layer in the form of independent packets. Then it transmits that data to the succeeding layer. The other function carried out by this layer are:

Logical addressing and routing are the major operations performed by the network layer. It translates the network logical address into a physical MAC address. So that, the two systems residing in the different networks could also communicate efficiently. A packet also requires a path that it can follow to reach the destination avoiding congestion and failed components. Thus, it also facilitates the automatic updation of the routes.

It is responsible for transforming the raw transmission service (Physical layer) into a reliable link. It makes the physical layer free from error by masking them so that the network layer does not notice them. The layer splits input data into frames. The tasks carried out in the data link layer are:

It transmits the individual bits over the transmission channel. The physical layer deals with the description of:
The characteristics of the interface between the devices.

Advantages and Disadvantages of OSI Model 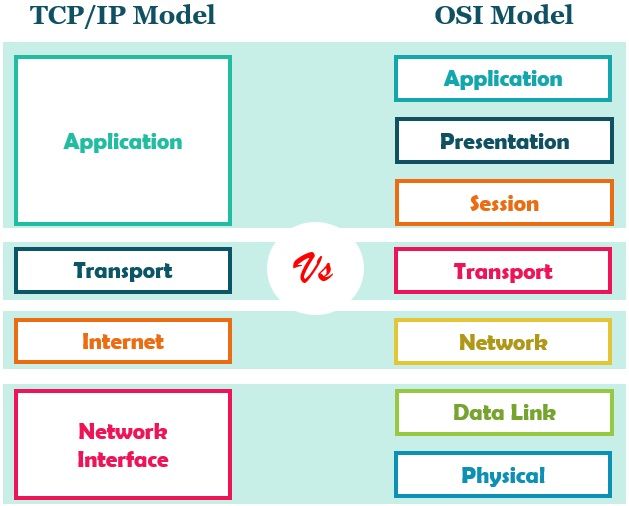 The TCP/IP Model was developed before OSI Model, and hence, the layers differ. Concerning the diagram, we can clearly see that TCP/IP Model has four layers namely, Network Interface, Internet, Transport and Application Layer.

On the other hand, the OSI model has seven layers. The model has merged data link and physical layers to make the network interface layer of the TCP/IP model. The Application layer of TCP/IP is a combination of the Session, Presentation and Application Layer of the OSI Model.

Concerning the above article, we can conclude that the TCP/IP Model is more reliable than OSI Model.

We use TCP/IP for end-to-end connection so as to transmit the data over the internet. Subsequently, TCP/IP is robust, flexible, and tangible and also suggests how data should be sent over the web. The transport layer of the TCP/IP Model checks whether the data has arrived in order, it has an error or not, whether lost packets are resent or not, acknowledgement is received or not, etc.

In contrast, the OSI model is just a conceptual framework to interpret how applications communicate over a network.