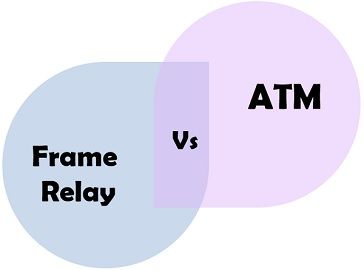 When the multimedia is transferred across the network, it needs the variable bandwidth and distinct traffic types which is known as the heterogeneous service. To deliver these services the high transmission rate is required, and different bit rates must be combined. These characteristics are achieved by distinct techniques known as frame relay and ATM (Asynchronous Transfer Mode). The difference between frame relay and ATM lies in the speed of transmission, efficiency, accurate delivery of the packets, etcetera. The frame relay provides 1.544 Mbps or 44.736 Mbps. On the other hand, ATM provides 51 Mbps or 155 Mbps.

The Frame relay is a packet mode transmission service devised to handle the upgraded type of WAN. X.25 was the earlier technology used in place of frame relay, but there are some demerits of using it such as low data rate, an unnecessary increase in the rate of the flow and error control.

The frame relay service uses either a permanent or switched virtual circuit to set the connection and enable the transfer of bit from source to the destination at a fair speed in an affordable cost. Before the advent of frame relay and X.25, the slow telephone lines were used for the intended purpose. In the older technology, the network delays, protocol overheads and equipment cost were the major drawbacks.

Frame relay is used to transfer the data in the form of packets, with the help of the data link layer. Here, a unique identifier DLCI (Data link connection identifier) identifies the virtual connection which is referred to as ports. The frame relay basically connects two DTE devices by using a DCE device. The DTE devices connected to the frame relay is assigned with a port to make each remote connection unique. It can create two types of circuits, PVC (Permanent virtual circuit) and SVC (Switched virtual circuit).

Layers of the Frame Relay

There are only two layers in the frame relay that are the physical layer and data link layer.

ATM stands for Asynchronous Transmission Mode; it is a switching technique developed by integrating the features of the telecommunication and computer networks. ATM make use of cells in order to transfer information of many service forms such as voice, data and video. These cells are encoded by using asynchronous time division multiplexing. It also enables the communication between the devices works at the variable speed by combining the multiplexing and switching, and it is appropriate for the bursty traffic. These cells are nothing but the collection of fixed size packets.

The ATM networks need ATM switches and ATM endpoints for its functioning. ATM switch transit a cell transmitted from an ATM endpoint to an ATM network. Before transmitting the cell, it first scans the header of the frame and update it if needed then switch it to output interface to deliver it to the destination. The ATM endpoints also include the network interface adapter.

The ATM reference model consists of layers and planes as shown in the diagram. There are three basic layers in the ATM- physical, ATM and ATM AAL layer.

The different planes included in the ATM reference model are control, user and management.

The VPI field employs the virtual values to switch the cells between the ATM networks such as the routing. The UNI interface contains 8 bits for the VPI field which allows 256 virtual path identifiers. While NNI interface format can have 12 bits in the VPI fields and that allow 4,095 virtual path identifiers. On the other hand, the VCI field is used to perform switching for the end users and has a 16-bit value for both UNI and NNI interface formats. This field permits to get 65,536 virtual channels.

Advantages of the Frame Relay

Advantages of the ATM

Disadvantages of the Frame Relay

Disadvantages of the ATM

The frame relay is controlled through the software while ATM is implemented for hardware which makes it more costly and fast. ATM can achieve higher processing and switching speed by providing flow and error control.