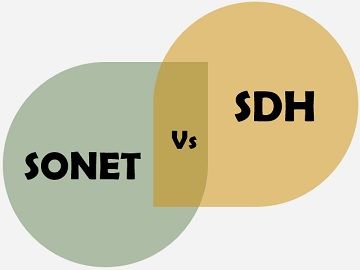 SONET and SDH are the interfacing optical technologies mainly used in telephone networks. These technologies are very similar; however, there exist minor differences between them. The first point based on which SONET and SDH can be distinguished is the origin of the standards SONET is developed by ANSI and can carry payloads for the North American PDH hierarchy. On the other hand, SDH was developed by ITU-T (international standard).

SONET (Synchronous Optical Network) is a term majorly used in the field of the telephone network as it made the telephonic communication to be transferred through optical light using an optical cable. Its primary function is to transmit digital information over optical fibres, and the source of the light is LED or laser. The major part of the data processing such as switching are carried out electronically. SONET is implemented and used in North America. It was devised to satisfy the need of inter-operable vendors and technologies that existed in past years.

Multiplexing in telecommunication is the method of merging two or more channels into a single channel. There are various multiplexing techniques like FDM, TMD, CDM, OFDM, etc. To digitize the analog voice the signal is sampled at the rate double that of the maximum frequency component in the signal, and it is called as PCM (Pulse Code Modulation) technique.

The electrical signals utilized in the transmission process employs the system clocks which are highly accurate. Primarily, the clock is founded on the natural frequency of vibration of some crystals, for example, quartz crystals. The systems that implement different clocks those are not synchronised are known as asynchronous, while the systems which employ different clocks and even then maintain its accuracy are known as the plesiochronous system.

SDH expands to Synchronous Digital Hierarchy emerged as a standard body for the telecommunication networks founded on optical fibres. However, the SONET and SDH are very similar, and SDH is said to be a variant of SONET. It has facilitated a transmission network which does not rely on vendor and provides a complex signal structure along with substantial characteristics. As an outcome, the new network technologies and equipment are needed to be deployed, and high power is needed for handling the system operations.

The SDH characteristics are founded on high order multiplexing. This is achieved by the hierarchy of progressing data rates at maximum 565 Mbps within Europe. It also brought the concept of digital transmission over coaxial cables. As we have discussed the concept of a plesiochronous system in the above definition, where the multiplexing involves the combination of the lightly nonsynchronous rates and this results in Plesiochronous digital hierarchy (PDH).

The PDH was the predecessor of the SDH, but it was quite inefficient due to the interleaving of the bits where the need for the new synchronous method has arisen.

Key Differences Between SONET and SDH

The fastly moving information of various digital channels is simultaneously multiplexed in SONET, which is needed to be separated from each other. So, to achieve this distinction between the different channels information SONET implies the concept of Frames, which can be seen as an address.

In SONET the data is arranged into 9X90 two-dimensional array (9 rows and 90 columns) which makes 810-byte blocks known as frames. These are serially transmitted, from the extreme left to the right, byte by byte. Each row has two 3 bytes of transport overheads (total number of transport overhead of 9×3 = 27 bytes) and 87 bytes of payload (i.e., 9×87 = 783). 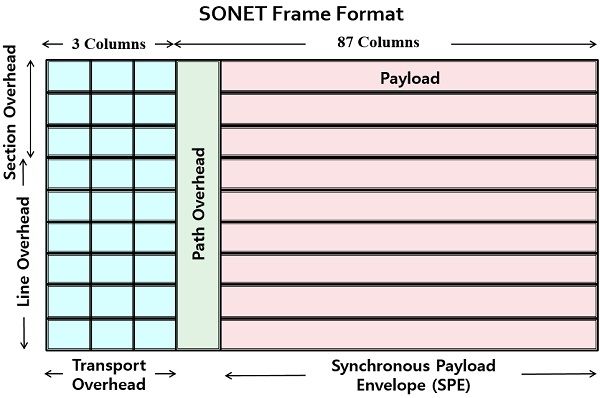 A payload is the traffic transmitted by the SONET network and overhead is needed to observe and administer the signal transmission. Among 27 bytes in transport overhead, the 9 bytes are for section overhead, and 18 are for line overhead.

The SDH frame format is created on the basis of the synchronous transport module STM-1. The organization of the frame comprised of 2430 bytes and arranged in 9 rows and 270 columns. 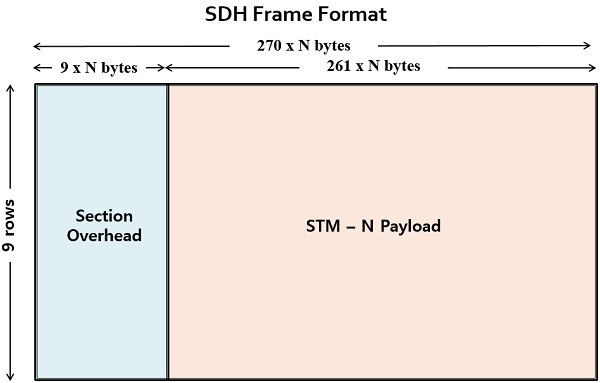 SONET and SDH are standards which provided a more efficient way of transmitting the digital data by using optical methods. Although, SDH provides better transmission rates as compared to SONET.