The computers and other electronic devices transmit the data from one to another device in the form of signals and using a transmission media. The transmission media can be fundamentally categorised into two types guided and unguided.

Unguided media is a wireless communication which carries electromagnetic waves by making use of air as a medium and also in the vacuum, it can transmit data and without requiring a physical conductor. Guided media need a physical medium to transmit signals such as wires. Guided media is classified in three ways twisted pair cable, coaxial cable and fibre-optic cable. The article explains you the difference between optical fibre and coaxial cable.

As mentioned previously the optical fibre is a type of guided media. It is made up of glass, silica and plastic, where the signals are transmitted in the form of light. Optical fibre uses the principle of total internal reflection to guide light through the channel. The structural composition of an optical fibre includes a glass or ultrapure fused silica surrounded by a cladding of less dense glass or plastic. The cladding is covered with a buffer either loose or tight, to protect it from moisture. Finally, the whole cable is then encased by an outer covering made by a material such as teflon, plastic or fibrous plastic etc.

The density of the two materials is maintained in such a way that the light beam travelling through the core is reflected off the cladding rather than refracted into it. In the optical fibre the information is encoded in the form of a light beam as a sequence of on and off flashes that signifies 1’s and 0’s. 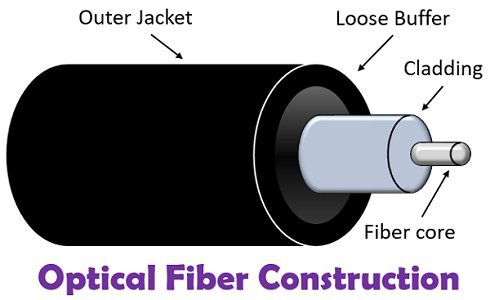 Fibre optics cable is made up of glass and is delicate which makes it difficult to install. The repeater is placed at 2 km to 20 km depending on the type of the fibre. There is two types of optical fibre, multimode and single mode. Multimode fibre has two variations, step index and graded index fibre. LED and lasers can be used as the light source of the optical cable.

The coaxial cable transmits the signals in the form of electrons, low voltage electricity. It is made up of a conductor (usually copper) placed at the centre or core which is surrounded by an insulating sheath. The sheath is also encased in an outer conductor of a metal braid, foil or a combination of the two. The external metallic wrapping acts as a shield against the noise and completes the circuit as the second conductor.

The outer metallic conductor is also enclosed in a plastic covering to protects the whole cable. Coaxial cable is a good alternative to an ethernet cable. The coax cables are most popularly used in the cable TV to distribute the TV signals.

The power loss generated by a coaxial cable is coined by the term attenuation, and it can be affected by the length and frequency of the cable, attenuation can increase as the length increases. There are also various losses generated such as resistive loss, dielectric loss and radiated loss.

Advantages and Disadvantages of Coaxial Cable

The Optical fibre is more efficient than coaxial cable in terms of data transmission speed, noise and interference resistance, dimensions, bandwidth, losses etc. But, coaxial cable is cheaper, easily available and installed, and bending of the cable does not affect the signalling in the cable.