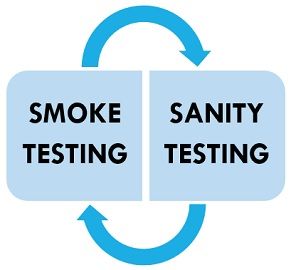 The Smoke testing is mainly originated from the integration testing approach. It usually starts before full-scale testing which covers a broad part of the software but not more complex and detailed aspects of it. Smoke testing is considered as the non-exhaustive testing where the working of the most crucial features of the product is checked.

The activities performed in the smoke testing are:

The Sanity testing is a way to test the build entirely after applying the small alterations in the code and the functionality. It primarily checks whether the product is working correctly after alterations and the bugs have been fixed or not. The sanity testing is the subgroup of the regression testing and performed before the launching of the product. If the proposed functionality does not work according to expectations, the composed build is discarded to eliminate the time and cost needed in the rigorous testing.

The software needs to go through the other testing before undergoing to the sanity testing. This type of test is deeper in sense, means that it considers the detailed aspects of the software.