Unit testing is the technique of substantiating the smallest units in the software. These smallest components of the software are tested in isolation. A driver component is responsible for generating method calls for the components being tested. The component which utilises a method is imitated as the stub. These stubs are the initial replacement for the misplaced methods.

The unit test is directed by white-box testing, and the steps in the unit testing are carried out for multiple components simultaneous. It emphasises on, testing the proper flow of data along the module interfaces because if it is ignored the other tests would become uncertain.

Either one of the operations given above could be performed at a time. The Unit testing is a vital part of the software testing which ensures the faster development, debugging, sound design, documentation and feedback mechanism, and further reduces overall cost.

The System Testing verifies the behaviour of the system entirely. It performs various tests in progression. However, these tests have the distinct intent and check whether all the system components are working correctly in an integrated way or not.

In this testing, the test cases are designed according to the requirement specification, and its code is said to be similar to the black box. The developers having the broad knowledge and visibility about the structure of the system usually performs the system testing.

There are several forms of system testing among which few of them are describes below.

Relation between Unit testing and System testing in the context of software testing strategy:

According to the diagram shown below, the unit testing starts from the centre and focuses on each of the software unit (component) as per the implementation. Then comes integration testing where the design and construction of the software architecture are examined. When we go outward, the validation testing encounters where the requirements against the requirement specification are validated. System testing present in the outermost part which tests the software and its other system portions as an integrated component. 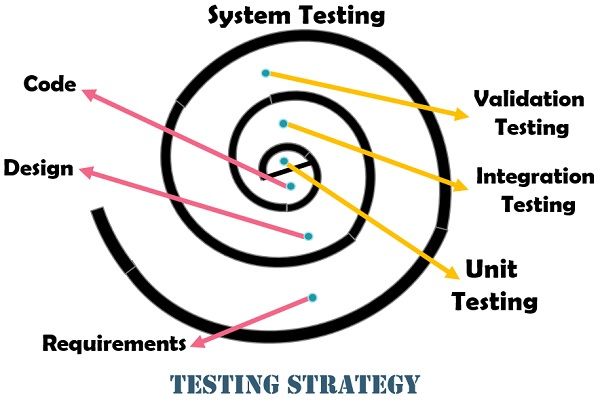 The Unit testing is the testing technique in which the smallest unit of the program is tested. On the other hand, the System testing relies on the high-level design specification and checks whether the system implementation satisfies the system requirement specification or not.