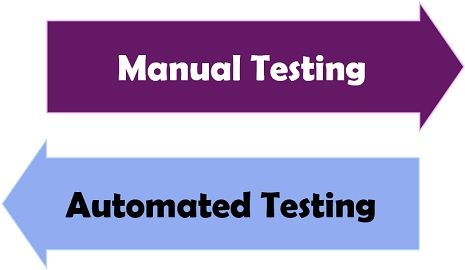 Earlier for testing software products, the one and only method used was manual testing, in which the human itself find defects in the software. The tester performing the manual test acts as an end user who is allowed to use all of the software features and verifies its behaviour.

By the advancement in the technology, automated testing came in existence which involves a testing tool (i.e, a software program) to test the software’s output against its expected output.

The Manual testing is nothing but a testing method which requires the human intervention to conduct the software testing. The system is tested by the supervision of the people who are responsible for preparing, inserting and utilizing the outcome of processing from the software systems instead of producing and entering the test transaction into the system. Here, the tester writes test cases, provides the inputs, examine the expected and actual output, and record results.

It first checks the interface between the software system and the end user. In other words, it enters in transactions and obtains the results from that processing. Further, it takes additional action according to the information received until all characteristics of the manual computer interface are properly tested.

When is manual testing implemented?

Manual testing is a significant part of the software testing process which must be performed during the whole system development life cycle in order to ensure that the manual systems function properly. However, it is appropriate to conduct manual testing in the following cases as it needs human observatory skills.

Automated testing uses the softwares to regulate the execution of the tests, compare the resulting output with the predicted output, set up the test preconditions and test reporting functions. It contains a group of experiments or test cases which helps in determining the behaviour of the implementation.

The intervention of the automation in the testing process results in reducing the time required to execute test cases. Automation testing helps test engineers to concentrate on a more crucial task and make the system handle ordinary tasks.

When is the automated testing implemented?

It is better to conduct automated testing in the following areas.

What are the different approaches to automation testing?