The System and Integration testing are the types of testing or test levels required to perform to detect the defects before the launch or delivery of the software product. The system and integration testing are distinguished depending on the which part of the developed software or product the test has been performed. System testing tests the behaviour of the entire system as specified by the scope of a development product. On the contrary, the integration testing tests the interfaces exists or created between components, interaction to different sections of the system like a file system, operating system, Hardware or interfaces among the systems.

When a software or application product is developed, it is tested at the final stage as a whole by combining all the product modules and this is known as System Testing. The prior aim of conducting this test is that it must meet the customer or user requirement specification. It is also known as an end-to-end test, as it can be performed at the end of the development. The system testing does not depend on system implementation; in simple words, the system tester isn’t aware of which technique among procedural and object-oriented is implemented.

The system testing is broadly classified into functional and non-functional requirements of the system. In the case of functional testing, the testing is similar to black-box testing which is based on specifications instead of code and syntax of the programming language used. On the other hand, in non-functional testing, it checks for performance and reliability through generating test cases in the corresponding programming language.

System testing is carried out in a controlled test environment such as software versions, testware and test data must be governed.

Integration testing is the collection of the components (modules) of the software, where the relationship and the interfaces between the different components are also tested. It requires coordination between the project level activities of integrating the constituent components together at a time.

There are levels of integration testing, which involves:

There are several ways to implement incremental integration testing:

Testers or test engineers prefer an incremental approach of integration testing rather than big-bang, as this helps in early detections of the errors and defects. Usually, developers can also do integration testing who know the functional specification of the project but sometimes it also requires specific test engineers to check non-functional specifications. 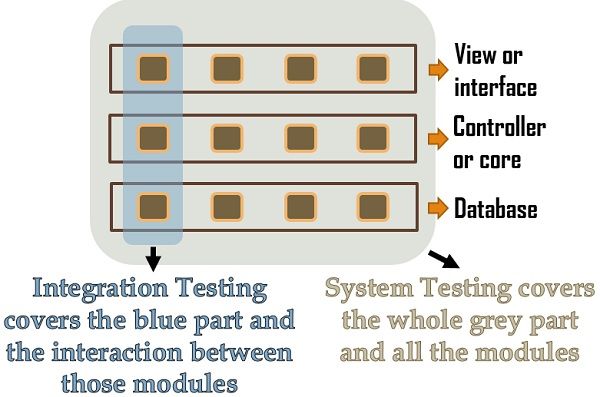 System testing is a functional process where the functionality of the system as a whole is examined. Conversely, in integration testing, the previously integrated units are integrated according to the functional decomposition tree.