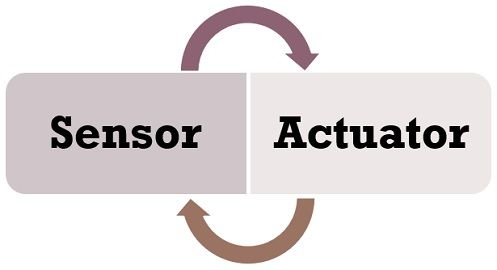 Sensors and Actuators are essential elements of the embedded systems. These are used in several real-life applications such as flight control system in an aircraft, process control systems in nuclear reactors, power plants that require to be operated on an automated control. Sensors and Actuators mainly differ by the purpose both provide, the sensor is used to monitor the changes in the environment by using measurands while the actuator is used when along with monitoring the control is also applied such as to control the physical change.

These devices act as the mediator between the physical environment and the electronic system where the sensor and actuator are embedded.

A sensor is an electronic instrument that is able to measure the physical quantity and generate a considerate output. These output of the sensors are usually in the form of electrical signals. Let’s understand with an example, suppose we need to control the speed of our vehicle and for that purpose, we are designing a control system for it. It could not be possible by just fixing the fuel throttle, it needs to be adjusted at it each moment when the speed changes (such as in the uphill and downhill). This can be done by using a sensor to measure the speed of the vehicle and convert it into digital form for the digital system. So, according to the measured speed, the throttle is adjusted by the connected electronic device.

Now let’s understand how a sensor works. Sensors are placed as such they can directly interact with the environment to sense the input energy with the help of sensing element. This sensed energy is converted into a more suitable form by a transduction element.

There are various types of sensors such as position, temperature, pressure, speed sensors, but fundamentally there are two types – analog and digital. The different types come under these two basic types. A digital sensor is incorporated with an Analog-to-digital converter while analog sensor does not have any ADC.

An actuator is a device that alters the physical quantity as it can cause a mechanical component to move after getting some input from the sensor. In other words, it receives control input (generally in the form of the electrical signal) and generates a change in the physical system through producing force, heat, motion, etcetera.

An actuator can be interpreted with the example of the stepper motor, where an electrical pulse drives the motor. Each time a pulse given in the input accordingly motor rotates in a predefined amount. A stepper motor is suitable for the applications where the position of the object has to be controlled precisely, for example, robotic arm.

Key Differences Between Sensors and Actuators

Sensors present the computer with information about the state of the system. On the other hand, actuators accept commands to perform a function.