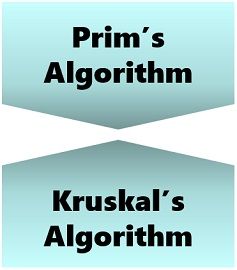 The Minimum Spanning Tree (MST) is a graph whose word is to determine the lowest cost edges within a single connected component. It is implemented in various applications such as in wiring scheme for the telephone network, LDPC codes for error correction cluster analysis, finding the road networks (specifically in network design). It also proves that greedy solution can probably give an optimal solution of the problem.

The Prim’s algorithm searches for the minimum spanning tree for the connected weighted graph which does not have cycles. The algorithm was devised by Vojtek Jarnik in 1938, later it was rediscovered by Robert Prim. The algorithm works by initially choosing a root node r, then expands along the adjacent vertices by choosing the minimum weight edges and the process is repeated until all the vertices are visited. The prim’s algorithm has O(log V2) time complexity in the worst case. It forms a single tree out of the set of edges having least cost. The algorithm follows the greedy strategy where at each step the tree expands with the addition of a new least weighted edge possible.

Steps involved in a Prim’s Algorithm

Kruskal’s algorithm is another greedy approach to produce the MST (Minimum Spanning Tree). It was developed by Joseph Kruskal. The objective of the algorithm is to find the subset of the graph where every vertex is included. It works by initially treating each node as ‘n’ number of distinct partial trees. After performing each consecutive step, two disjoint partial trees are connected into a single partial tree through an edge having the minimum weight. The edge is added if it does not form any cycles. This process is repeated until n-1 iterations.

The time complexity of the algorithm is O(log V). There is no compulsion of producing a connected graph. The generating minimum spanning tree can be disconnected, and in that case, it is known as minimum spanning forest. A forest is a combination of trees. Kruskal’s algorithm is preferred when the graph is sparse i.e. it consists of less number of edges.

Steps involved in the Kruskal’s Algorithm

The step by step pictorial representation of the solution is given below.

The performance of the two algorithms could differ depending upon the certain factors such as the number of vertices. Prim’s algorithm runs in O(V2) time and works well in the massive graphs while Kruskal’s algorithm consumes O(log V) and perform suitably with small graphs. Although, among both of the algorithm Kruskal’s algorithm can generate better results.