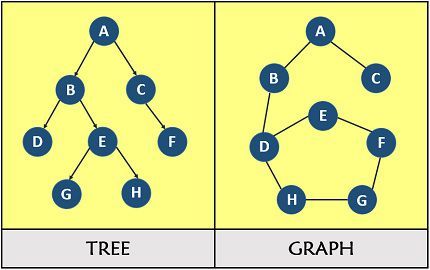 Tree and graph come under the category of non-linear data structure where tree offers a very useful way of representing a relationship between the nodes in a hierarchical structure and graph follows a network model. Tree and graph are differentiated by the fact that a tree structure must be connected and can never have loops while in the graph there are no such restrictions.

A tree is a finite collection of data items usually termed as nodes. As it is mentioned above that a tree is a non-linear data structure which arranges data items in sorted order. It is used to show a hierarchical structure between the various data elements and organizes the data into branches which relate the information. The addition of a new edge in a tree results in a formation of the loop or circuit.

There are several types of trees such as a binary tree, binary search tree, AVL tree, threaded binary tree, B-tree, etc. Data compression, file storage, manipulation of the arithmetic expression and game trees are some of the application of tree data structure.

There are various terms associated with trees such as terminal node, edge, level, degree, depth, forest, etc. Among those terms, some of them described below.

A graph is also a mathematical non-linear data structure which can represent various kinds of physical structure. It consists of a group of vertices (or nodes) and set of edges that connect the two vertices. Vertices on the graph is represented as point or circles and edges are shown as arcs or line segments. An edge is represented by E(v,w) where v and w are the pairs of vertices. Removal of an edge from a circuit or connected graph creates a subgraph that is a tree.

The graphs are classified into various categories such as directed, non-directed, connected, non-connected, simple and multi-graph. Computer network, transportation system, social network graph, electrical circuits and project planning are some of the applications of graph data structure. It is also employed in management technique named as PERT (program evaluation and review technique) and CPM (critical path method) in which the graph structure is analysed.

Properties of a graph:

Key Differences Between Tree and Graph

Graph and tree are the non-linear data structure which is used to solve various complex problems. A graph is a group of vertices and edges where an edge connects a pair of vertices whereas a tree is considered as a minimally connected graph which must be connected and free from loops.