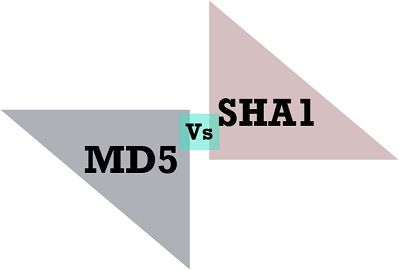 The MD5 and SHA1 are the hashing algorithms where MD5 is better than SHA in terms of speed. However, SHA1 is more secure as compared to MD5. The concept behind these hashing algorithms is that these are used to generate a unique digital fingerprint of data or message which is known as a hash or digest.

The essential features of hash algorithms are:

Hash algorithm primary purpose is the verification of the files instead of encryption of the file or message. I should not be used for storing the information or securing it.

The MD5 is a hashing algorithm known as a message digest algorithm introduced by Ron Rivest. However, there are several version of MD is created among which the first was the MD (message digest algorithm) followed by MD2, MD3, MD4 and at last MD5. These versions of MD was improving one after the other, the newer version was better than the old one.

MD5 was the fastest algorithm produced in that era and was able to protect itself from collisions. At present, it may not assure its security as the hacker and technology discovered the way to create collisions. It creates 128-bit messages where input text is processed in 512-bit blocks which are further separated into 16 32-bit sub-blocks. The result of the MD5 algorithm built a set of four 32-bit blocks which creates a 128-bit message digest.

These rounds vary in one major manner: step 1 of the four rounds could have different processing while the other steps in all four rounds are the same.

A single MD5 operation is expressed by an equation:

SHA is a hash algorithm developed and published by the collaboration of NIST and NSA in 1993 as a Federal Information Processing Standard (FIPS PUB 180). SHA1 was the revised version of SHA published in 1995 FIPS PUB 180-1. However, SHA1 is relatable to MD5 as it is based on MD5.

The SHA 1 can take any arbitrary message as an input which is 264 bits in length and produce 160-bit long message digest. SHA stands for Secure Hash Algorithm where secure signifies the one-way (pre-image resistance or collision resistance) property and inability to produce a similar message from two messages. Here, one-way means that the one can not obtain the original message with the help of the message digest of that message.

As we know that SHA1 is modelled after MD5 and most of its steps resemble MD5. So, here we will explain the SHA1 steps briefly.

However, in SHA1 there are four rounds and each round consist of 20 steps where each round takes the current 512-bit block, the register abcde and constant K[t] (where t=0 to 79) as the three inputs. 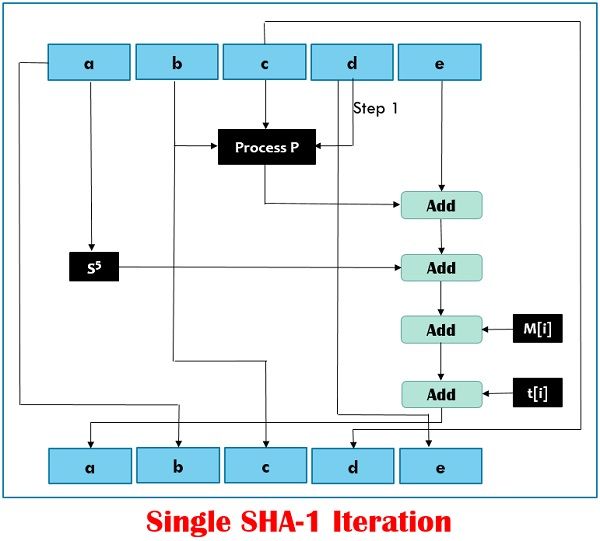 It makes 80 iterations, which can be mathematically expressed by:

Where,
abcde = The register constructed of five variables a, b, c, d and e
Process P = The logical operation,
St = Circular-left shift of the 32-bit sub-block by t bits.
W[t] = A 32-bit derived from the current 32-bit sub-block
K[t] = On of the five additive constants

Key Differences Between MD5 and SHA1

The crucial difference between MD5 and SHA1 is that MD5 was priorly developed and had several vulnerabilities where one can create the collisions for message digest. On the other hand, SHA1 brought a lot of improvement in hashing and is better than MD5. Although, there are still some issues in SHA1 which got resolved in SHA 256 and SHA 512.