Block Cipher and Stream Cipher are the methods used for converting the plain text into cipher text directly and belong to the family of symmetric key ciphers.

Block Cipher takes a message and break it into a fixed size of blocks and converts one block of the message at an instant. For example, we have a message in plain text “STREET_BY_STREET” required to be encrypted. Using bock cipher, “STREET” must be encrypted at first, followed by “_BY_” and finally at last “STREET”.

In actual practice, communication takes place only in bits. Therefore, STREET actually means the binary equivalent of ASCII character of STREET. Subsequently, any algorithm encrypts these; the resultant bits are transformed back into their ASCII equivalent.

An evident problem regarding the usage of Block ciphers is repeating text, for which the same cipher is generated. Hence, it would give a hint to the cryptanalyst which makes it is easier to figure out the recurring strings of plain text. As a result, it can reveal the whole message.

To overcome from this problem the chaining mode is used. In this technique, the preceding block of cipher text is mixed with the current block, so as to the cipher text vague, this avoids the recurring patterns of blocks with the same content.

Stream Cipher typically encrypts one byte of the message at that moment instead of using blocks. Let’s take an example, suppose the original message (plain text) is “blue sky” in ASCII (i.e. text format). When you convert these ASCII into equivalent binary values, it will give the output in 0’s and 1’s form. Let it be translated in 010111001. 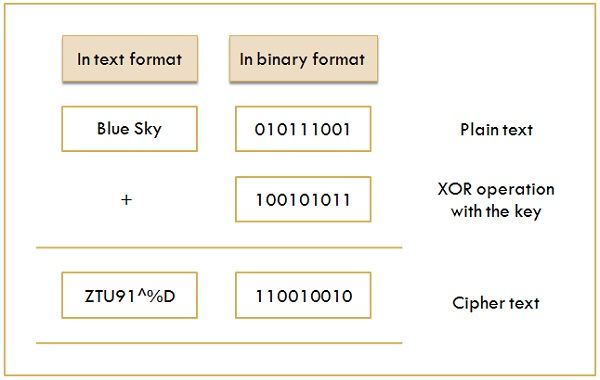 Block Cipher and Stream Cipher differ in the way in which plain text is encrypted and decrypted. The idea behind block cipher is to divide the plain text into blocks further encrypt those blocks. While stream cipher converts plain text bit by bit similar to stream.