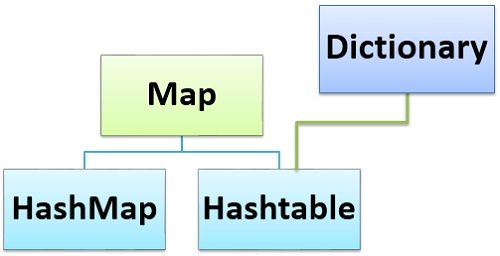 Let’s view to comparison chart shown below to learn some more differences between HashMap and Hashtable.

HashMap is a class that implements the Map interface and extends the AbstractMap class uses the hash table. The HashMap’s object refers to a collection/set of <Key, Value> pair where each key is mapped to a particular value. Keys in a collection must be unique as they are used to retrieve the value. On the other hand, the values in a collection can be duplicated.

The declaration of HashMap class and constructors of the HashMapclass are as follow:

let us now learn how to feed the entries in a hash map.

In above code, you can see that I created an empty HashMap object hm with default initial capacity and default fill ratio. Then I inserted four entries in the hash map using put(K,V) method that maps the key to the value. You can observe that entries are not printed in a sequence you feed them because the insertion order is not fixed.

Now, consider a case that you already have an entry<K1,V1> in the hash map and after that you try to insert put(K1, V5), i.e you try to map the same key with a different value. Then the put method will replace the old value V1 with the new value V2 and returns the old valueV1, otherwise, if we never try to replace a key’s value then put method returns Null for that key.

Hashtable is a class that extends the Dictionary class which is a legacy class and is reengineered to implement the Map interface. The Hashtable uses the hash table as its data structure. The Hashtable is similar to HashMap as here also the object of Hashtable refers to the collection of entries where each entry is a pair of <Key and Value>.

All the keys in a collection must be unique on the other hand, the values can be duplicated. The keys are particularly used to obtain the hash code value which decides the index, where the <Key, Value> pair will be stored in a hash table.  In a hash table, neither a key nor a value can return Null pointer.

Let us now learn how to insert the <Key, Value> pair in the hash table.

In above code, I created an empty object of Hashtable and inserted four entries using put() method. Inside put method I called hashCode( ) which computes and return the hash code value which will act as the index value for entry object. As you can see I didn’t mention the size of hash table so by default it will be 11. Here also, insertion order is not preserved and hence, when printed entries did not appear in sequence it was fed.

Key Differences Between HashMap and Hashtable in Java

HashMap is better in performance as its objects are unsynchronized and multiple threads can operate on it at the same time and hence, it is faster than Hashtable.