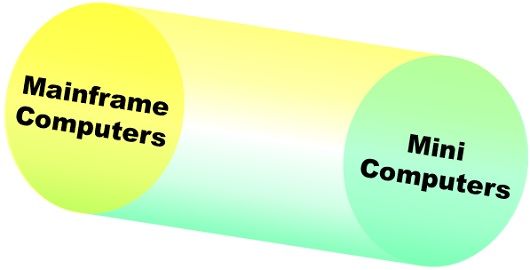 Mainframe and minicomputers are the types of a computer where mainframe computers provide much more features than minicomputer and high capacity for memory and processing speed. Initially, mainframes were constructed to provide reliability for transaction processing and are mainly utilized as servers. On the other hand, minicomputers are mid-size, small computers which people can use personally or as a high-end device too.

The Mainframe computer is a category of the computers having a larger size, fast processing and larger memory size. Even these computers can cover an entire room. Mainframe computers are preferred for a centralised location where its CPU is connected to several terminals (input/output devices), therefore permitting multiple users to share the single CPU. That is the reason it is said to be multi-user and multiprogrammed. It contains a huge memory and could support thousands of users as mentioned before.

It is mainly employed in the application where the enormously high-speed processing is required like railway and airline reservations, banking and commercial application of large industries or companies where it can sit as a machine to process tons of transaction simultaneously.

The minicomputer is intended for medium scale and is generally smaller in size and slower in speed. There is a huge difference in the cost of the minicomputer and it is less costly than the other types such as super and mainframe computers. It is used at places where the processing can be distributed among various minicomputers instead of using mainframe. Real-time application are the main application where minicomputers are implemented.

If we compare minicomputer with the microcomputer the minicomputer is far better than it in terms of processing speed and storage capacity. Minicomputers are capable of supporting 4 – 200 users at a time. Minicomputers can be accessed through the PCs or terminal. The first minicomputer was named as PDP-8 developed by DEC (Digital Equipment Corporation) in 1969 and built by discrete transistors then the later versions of it were made of small scale IC’s.

Key Differences Between Mainframe and Minicomputer

Mainframes were developed with the intentions of providing reliable and secure I/O facilities which can utilize hardware and can capable of offloading into distinct engines. Whereas the minicomputers are mid-size computers lie between microcomputer and mainframe where the minicomputer can allow multiple terminals to connect to it and large processing speed but less than mainframes. However, the mainframes mainly serve as servers but minicomputers can be used as a personal computer or used in offices, workstations etcetera.