Multiprocessor and multicomputer are types of parallel computers. The fundamental difference between them is that a multiprocessor is a solitary computer containing several processors interconnected with the common computing resources such as memory and I/O devices. On the contrary, the multicomputer is constructed by interconnecting multiple autonomous computers through a network and each autonomous system has its own computing resource.

Multiprocessor is a computer used for processing and executes isolated instruction streams residing in a single address space. A wide range of multiprocessors are the shared memory devices, built by linking various processors to one or more memory banks with the help of a bus or switch.

There are three models comes under a multiprocessor

Multicomputer are the computers where the processors can carry out separate instruction streams and have their own individual memory. These are not capable of accessing the other memories attached to other processors. Most of the multicomputers are the distinct memory machines made by linking nodes (where each node includes a microprocessor and some memory).

The NORMA model is based on multicomputers. NORMA stands for No-Remote Memory Access where multiple autonomous nodes containing a processor, local memory, linked disks and I/O peripherals communicates through passing messages instead of direct communication. 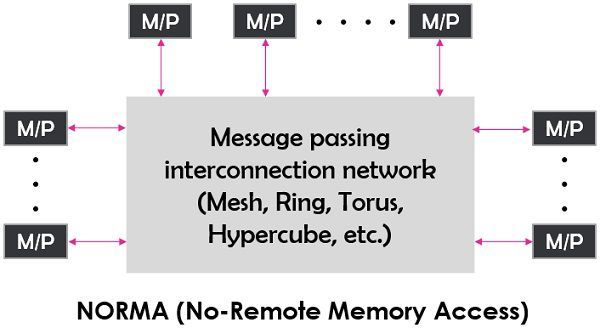 Key Differences Between Multiprocessor and Multicomputer