Another difference between Bluetooth and Wifi is that limited number of devices have provision to connect with other devices in Bluetooth. On the other hand, Wifi provides access to more number of users.

Bluetooth is used when speed is not our concern and low bandwidth is allocated to it. Wifi provides high bandwidth as the speed of internet is an important factor.

Bluetooth is an open specification (universal) for short-range wireless voice and data communications. Inventors of Bluetooth are Ericsson, Nokia, IBM, Toshiba and Intel formed a Special Internet Group (SIG) to expand the concept and to develop a standard under IEEE 802.15 WPAN (Wireless Personal Area Network).

Bluetooth is the first widespread technology for a short-range ad-hoc network that is designed for combined voice and data application. Compared with Wifi, Bluetooth has a reduced data rate. However, it has an embedded mechanism to assist the application. Bluetooth is inexpensive personal area ad-hoc network operating in unlicensed lands and owned by the user.

Bluetooth topology is referred to as a scattered ad-hoc topology. It defines a small cell called Piconet which is a collection of devices connected in an ad-hoc fashion.
There are four states 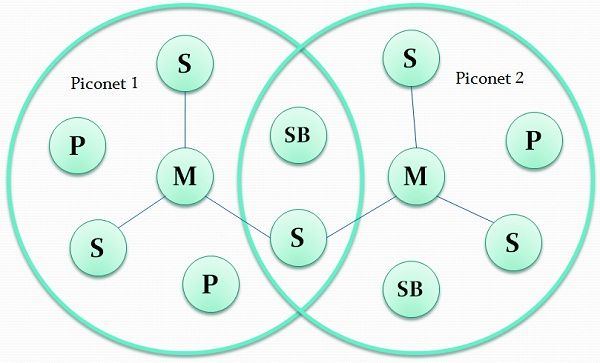 The FHSS (frequency hopping spread spectrum) modem is utilized in the physical connection of the Bluetooth with a nominal antenna power of 0 dBm(10 m coverage) and alternately operated at 20 dBm(100 m coverage). Bluetooth hopping rate is 1600 hops/second. Bluetooth allocates a specific frequency- hopping format for each piconet. 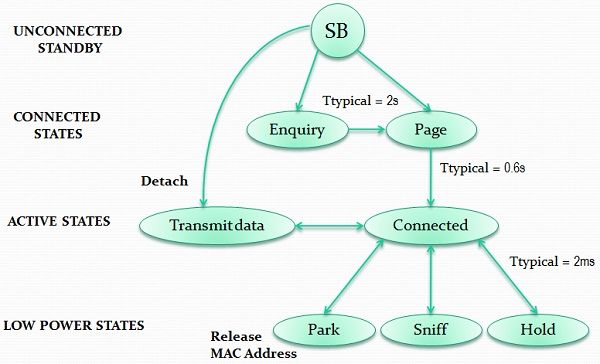 Wi-Fi (Wireless Fidelity) is the name given by the Wi-Fi Alliance to the IEEE 802.11 suite of standards. 802.11 defined the initial standard for wireless local area networks (WLANs), IEEE specifications are wireless standards that define an interface which uses are as the medium for transmitting and receiving signals between a wireless client and a station or access point, as well as among wireless clients.

The aim of the 802.11 standards was to develop a MAC and PHY layer for wireless connectivity for permanent, portable and mobile stations inside a local area.
IEEE 802.11 standard involves the following special features –

There are two operations models or topologies defined in IEEE 802.11-

Privacy is maintained in IEEE 802.11 by WEP(wired equivalent privacy) specification. A key sequence is constructed by a pseudorandom generator and 40-bit secret key where the key sequence is simply an XOR-ed with the plain-text message.

Key Differences Between Bluetooth and Wifi

Bluetooth and Wifi, both technologies were invented in order to enable wireless communication between the various devices. Although both has different purposes, has their relative advantages and disadvantages.