The Fact Table and Dimension Table, are the essential factors to create a schema. A fact table’s  record is a combination of attributes from different dimension tables. Fact table helps the user to analyze the business dimensions which helps him in decision taking to improve his business. On the other hands, dimension tables help fact table to collect dimensions along which the measures has to be taken.

A Fact table is a table that contains measurements along the attributes of dimension tables. It can contain the information at lowest possible level. Some fact table just contains summary data, called as Aggregated Fact Table. The fact table almost contains the date stamped data. Let us discuss the characteristics of a fact table.

Data Grain
Data grain shows how deep the measurements in fact table have been stored. Data grain must be at the possible highest level.

Sparse Data
Sometimes we may see the records in fact table that has attributes with null measures.  For example, there may not be any order on a holiday. So, attributes for this date will have null measures. We do not have to store measure for such kind of records as it does not provide any information.

Degenerated dimensions
Sometimes you may come across some dimensions in fact table, which are not additive at all. For example order_number, customer_id, you can not add these types of dimensions. However, in case, you need to find order made by a particular customer in this month; then you will need the customer_id to relate your search. These types if attributes or dimensions of fact table are called Degenerated Dimension.

Dimension Table is a key component for Start Schema.A dimension table contains the attributes which represent dimensions, along which the measurement is taken in fact table. Further, we will discuss some characteristics of a dimension table.

Attributes and Keys
Every Dimension table must have a primary key that uniquely identifies each record of the table. It is commonly observed that the dimension table contain many attributes. Hence, it appears to be wide i.e. when you create a dimension table you will find it spreading horizontally.

Attribute values
The values of the attributes in dimension table are rarely numeric, most of the times you will find the values in attributes are in textual format. For example product name, brand, category, sub-category, etc.

Drilling down, rolling up
Attributes of dimension table allow you to get the details either by traversing from higher level of aggregated attributes to lower level attributes. For example, if you want to find the total sale in a region then you may drill down to find sales by state, city, zip. You can even roll up to find total sales first by the zip, then by city and then state.

Records
Though a dimension table has too many attributes, it has fewer records. 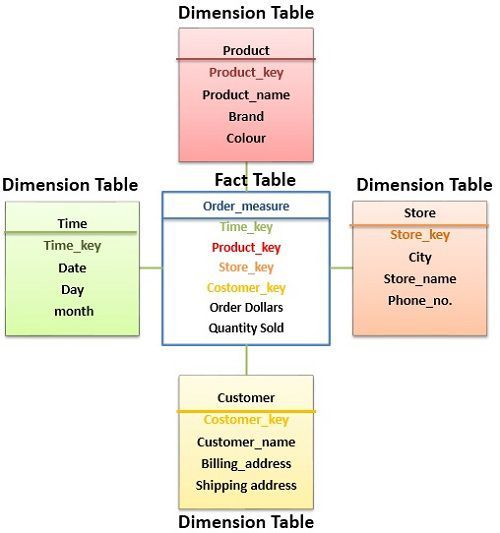 Both are equally important for a creation of schema but dimension table must be recorded before fact table. As it is impossible to create fact table without dimensions.