Star and snowflake schemas are the most popular multidimensional data models used for a data warehouse. The crucial difference between Star schema and snowflake schema is that star schema does not use normalization whereas snowflake schema uses normalization to eliminate redundancy of data. Fact and dimension tables are essential requisites for creating schema. You can also refer our previously published article on the difference between fact and dimension table to understand it thoroughly.

The design of relational databases involves entity-relationship data model. In these models, a database schema consists of a set of entities and the relationships between them. Such kind of data model is appropriate for online transaction processing. Further, data warehouse needs brief subject oriented schema which assists online data analysis. A schema is used to describe the entire database logically. Similarly, data warehouse requires schema for its maintenance.

Star schema is the simple and common modelling paradigm where the data warehouse comprises of a fact table with a single table for each dimension. The schema imitates a star, with dimension table presented in an outspread pattern encircling the central fact table. The dimensions in fact table are connected to dimension table through primary key and foreign key.

We are creating a schema which includes the sales of an electronic appliance manufacturing company. Sales are intended along following dimensions: time, item, branch, and location. The schema contains a central fact table for sales that includes keys to each of the four dimensions, along with two measures: dollar-sold and units-sold. The capacity of the fact table is reduced by the generation of dimension identifiers such as time_key and item_key via the system. 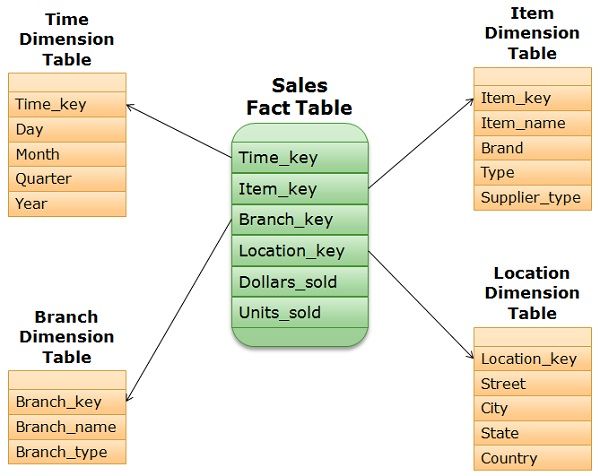 Snowflake schema is the kind of the star schema which includes the hierarchical form of dimensional tables. In this schema, there is a fact table comprise of various dimension and sub-dimension table connected across through primary and foreign key to the fact table. It is named as the snowflake because its structure is similar to a snowflake.

It uses normalization which splits up the data into additional tables. The splitting results in the reduction of redundancy and prevention from memory wastage. A snowflake schema is more easily managed but complex to design and understand. It can also reduce the efficiency of browsing since more joins will be required to execute a query.

In the snowflake schema, we are taking the same example as we have taken in the star schema. Here the sales fact table is identical to that of the star schema, but the main difference lies in the definition of dimension tables. 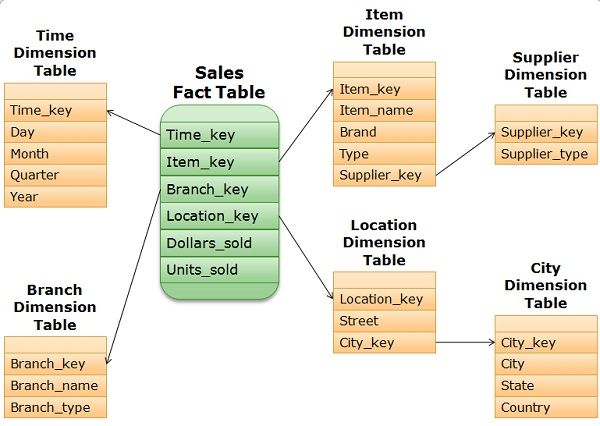 Star and Snowflake schema is used for designing the data warehouse. Both have certain merits and demerits where snowflake schema is easy to maintain, lessen the redundancy hence consumes less space but complex to design. Whereas star schema is simple to understand and design, uses less number of joins and simple queries but have some issues such as data redundancy and integrity.

However, use of snowflake schema minimizes redundancy, but it is not popular as star schema which is used most of the time in the design of data warehouse.