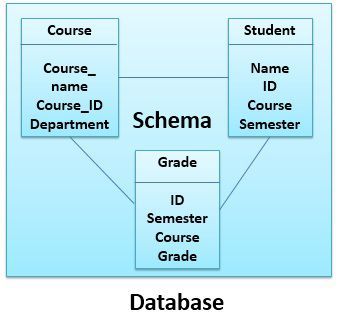 Database is a common term in today’s life. Many enterprises, firms, organisation, institutes, etc. requires a database to store their data in a well-formatted form so that it would be easy to retrieve useful information out of it. While designing a database, schema is specified that describes the structural view of a database which confirms the tables that would be involved in creating a database, the attributes for the table and their association.

Schema has to to be specified during the designing phase of a database. Let us learn the differences between the terms schema and database with the help of the comparison chart shown below.

Schema is a structural definition or description of an entire database. Once you declare the schema of a database, it should not be changed frequently as it will disturb the organisation of data in a database.

Shown below is the schema of a database with student information. You can see that it shows the name of all the tables and the variables of all those tables. 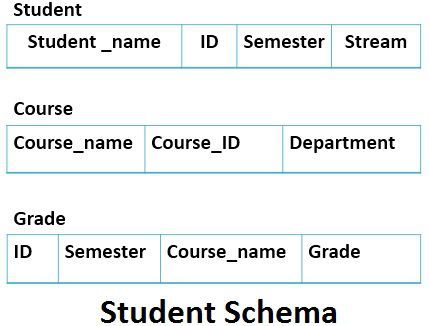 The database is a collection of well-organised and interrelated data. The database includes structure (Schema), data types and constraints of the data to be stored and the data i.e. facts or information about an object in consideration.

A database can be of any size, it can be generated and operated manually or can be computerised. Now a days database is operated digitally. DBMS (Database Management System) is held responsible for creating and maintaining the data in a database.

Key Differences Between Schema and Database

Before creating a database you have to create a schema that would define the outline for the formation of a database. A good schema is able to generate a good database. Schema should be created carefully as frequent changes are not accepted in a schema.