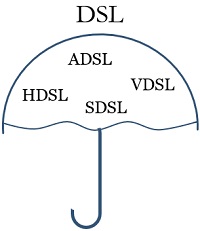 DSL and ADSL are the technologies adopted by telecom companies to facilitate faster data transmission. DSL (Digital Subscriber Line) is a set of technologies, among which ADSL is one.

Although ADSL is a subset of DSL technologies we will try to identify some of the differences between these two. We will also be discussing about both techniques in detail.

DSL is short for Digital Subscriber Line. It is a technology that reuses the existing infrastructure of telephone lines for the transmission of digital data. DSL is not a single technology instead, it is a set of technology that includes ADSL, VDSL, HDSL, and SDSL.

With the help of the figure below you can understand how a DSL connection is established over a telephone line to transmit data between the user and the internet.

The DSL modem is a device connected to your computer on one side and on the other side to the telephone line over which it transmits data. 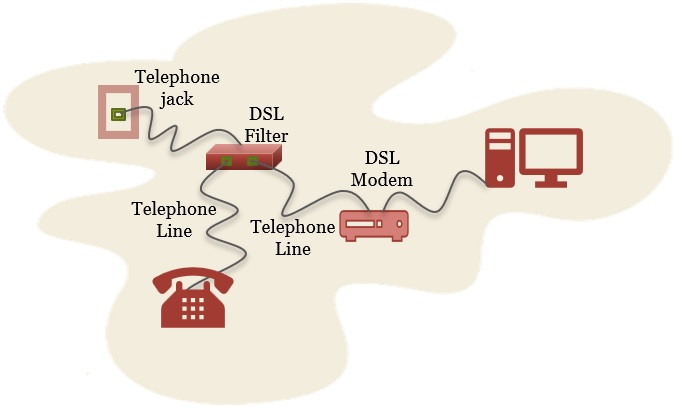 It is also responsible to convert the analog data that is coming from the telephone line into digital data. As the computer cannot process the analog data.

We all know that modem is short for modulator and demodulator. So, it is a device that can convert between digital and analog data.

ADSL (Asymmetric Digital Subscriber Line) is a DSL technology. The designers of ADSL have divided the available bandwidth unevenly. This leads to different uploading and downloading speeds. This is why we refer to it as asymmetric.

This scenario goes well with the residential users, who most of the time download stuff from the internet. But ADSL is not good for business users as they require large bandwidth in both directions.

Now if we remove this filter we will be able to use this entire 1.1 MHz of bandwidth for both data and voice communication.

However, 1.1 MHz is just a theoretical bandwidth. There are many factors that affect the bandwidth such as distance between the user and the switching office of the telephone company, size and quality of the cable used, etc.

Broadband with ADSL technique exploits this 1.1 MHz of bandwidth provided by the twisted pair using the frequency division multiplexing i.e. FDM. The bandwidth of 1.1 MHz is divided as you can see in the figure below: 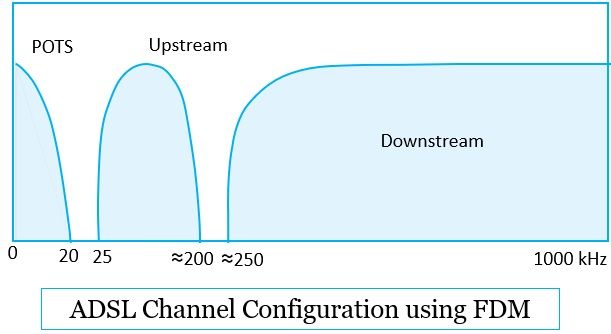 You can even use echo cancellation to exploit the rest of the bandwidth into upstream and downstream. In this case, the upstream band overlaps the lower portion of the downstream band.

However, this overlapping leads to two advantages over the two distinct frequency bands for upstream and downstream:

The echo cancellation technique must be implemented at both ends of the stream. The asymmetric digital subscriber line can be deployed up to a range of 5.5 km depending on the diameter of the cable.

Key Differences Between DSL and ADSL