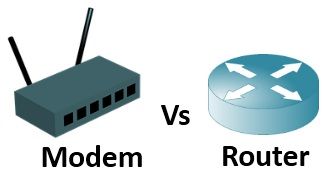 Modem and router are the networking devices. Where a modem connects your computer or your network to the telephone line (Internet Service Provider) for accessing the internet. A router is meant for connecting different networks together. The basic difference between modem and router is that modem necessary for connecting your computer network to the internet whereas, a router is essential to direct the path to the traffic of data packets on the network.

Let us study some more differences between modem and router with the help of comparison chart shown below.

A modem connects your computer network to your ISP (Internet Service Provider) without a modem you can not access the internet. Modem Connects to Computer or a router via RJ45 and a telephone line via RJ11. Modem operates on a Data Link Layer and transmission of the data is in the form of packets. A modem is placed between ISP, and a computer or a router.

Modem does not have a concern with the security of the computer or a network as a modem only meant to bring requested information from the internet to your computer or your network. It does not screen the data packet before forwarding it. Hence, there is a chance of potential threats to your computer.

Router is a networking device that directs the route to the data packets on the network. Router is also used to connect different networks together. Router can connect two LANs together or two WANs together or LAN and WAN together. A router is not essential for connecting a computer network to the Internet whereas, a router is only meant to distribute the data to the specified computer.

A router operates on Physical Layer, Data Link Layer, and Network Layer and like modem, here also the transmission of data is in the form of packets. As router screen, each packet before forwarding it to its destination, the implemented firewall in the router would help to determine potential threats that may harm your computer or your network. Hence, the router provides security to your computer and prevent your network from being attacked.

Key Differences Between Modem and Router

It is clear that if you want to connect your computer or your network to the internet, you must have a modem as it is the only mean to get connected to the internet. Nowadays ISP is offering a device that combines both a  router and modem in a  single device.