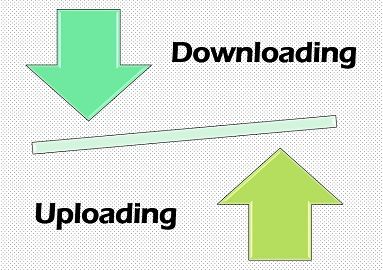 While using the Internet, we usually come up with terms like download and upload. But, what do these terms signify? The primary difference between the downloading and uploading is that the downloading means to copy something from other remote machine connected through some network or Internet, to the client machine (User’s machine). In contradiction, uploading means to copy some file or data from the client’s machine to the remote machine.

The downloading is the process in which any electronic device or computer obtains information from other sources residing in the network. The downloading process is analogous to saving some data. In actual, the data is stored at some other machine, and which is then transmitted and stored to your machine, then this is known as the downloading of the data.

For example, a browser downloads some specific web pages from the web server on the Internet. Furthermore, at the time of downloading the browser represents a logo or aminated graphics in the window of the browser.

The uploading is the just inverse process of the downloading where the files and documents from client’s computer or device is transferred to the other device or server by a network or Internet.

For example, the web publishing author frequently uses FTP to upload their web pages to the webserver. The other example of the uploading is when you upload a file to social website accounts such as Facebook and Instagram. These social networking sites have there own servers where the users can upload the images, videos, audios, etcetera.

Key Differences Between Downloading and Uploading

How downloading and uploading works

Downloading and uploading are dissimilar terms where the download is the saving the file from a web server to the client machine. On the other hand, upload means to send the file to a server or machine from the client’s machine. However, a similar mechanism is used for downloading and uploading the files, where the FTP (File Transfer Protocol) play’s an important role.