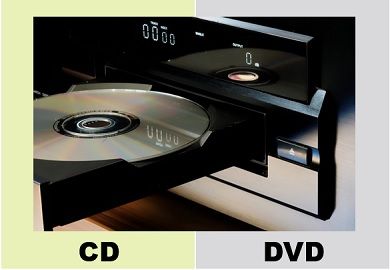 The CD and DVD are the versions of an optical disk which mainly differ in size and manufacturing method. Generally, a DVD can store more data than a CD, its one of the reason is that CD contain the polycarbonate substrate on only a single side while in DVDs it present on both of the sides. We have already discussed the construction and working principle of the optical disk in our previous article difference between Magnetic Disk and Optical disk.

The CD and DVD work on optical technology where the data retrieved by using light specifically lasers. A laser beam is concentrated into the CD or DVD in order to read the content (data) stored in the disc in the form of the bits and to write the content.

The CD (Compact Disc) was the first step towards the idea of digital encoding of the data. It uses a unique method of encoding in which a 14-bit code indicates a byte and this encoding technique also helps in error detection. It was a suitable replacement for the magnetic disk as it offered the low-cost solution for storing a significant amount of data.

The CDs first layer is constructed by the polycarbonate plastic which stores the data in the indented pits. This layer also provides a clear glass base. The flat or unindented area is known as the land. The thin aluminium material covers the programmed disk, and a protective acrylic then coats this aluminium layer. In the last part, the disk is stamped by a label. The pits are organised into the spiral track, in the outward direction from the middle of the disk, though decreasing the risk of damage by storing the index information at the start of the disk. , and the length and width of the pit are 0.8-3 and 0.5 microns respectively.

The stored bits are read through targetting the laser light on to the polycarbonate part of the spinning disk. Indented portion of the disk reflects back the light which is detected by the photodetector. There are several variations of the compact disc such as CD-R, CD-ROM, CD-RW.

The advent of DVD (Digital Versatile Disk) provided an alternative for the videotape used in VCR (Video Cassette Recorder) and CD-ROM used in PC as the DVD can acquire 7 times larger amount of the data relative to CD. It renders videos with excellent picture quality and random access. A DVD is built from the same material as the CD but the process and the layers are different, it is used from both of the sides such as two CDs are sticking together. It implements different techniques for the error correction i.e., RS-PC and recording code EFMPlus. 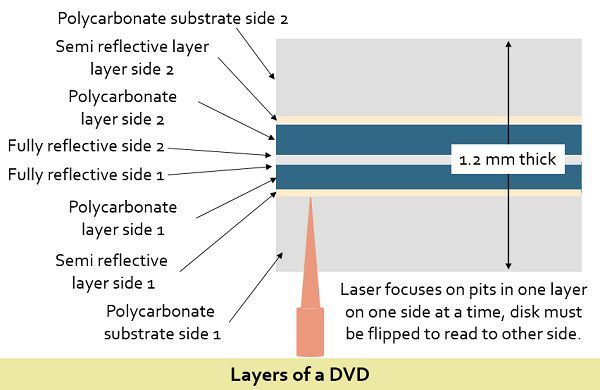 It also employs a dual layer of pits and lands on the standard layer and a semi-reflective layer on the top of the reflective layer. To read the content of the layers separately in a DVD the laser must be carefully focused. Similar to CD, DVD also has variants such as DVD-R, DVD-RW, etcetera.

Key Differences Between CD and DVD

The CD and DVD are the optical recording medium where CD was devised as an audio storage format while DVD is used as the universal storage format. The latter technology DVD can hold data about 7 times more than CD and its format efficiency is also 32% greater than a CD.