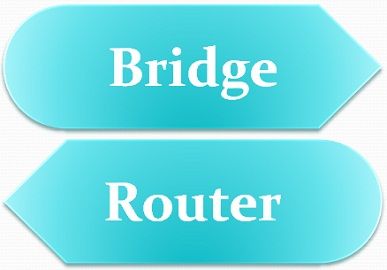 The basic difference between Bridge and Router is that Bridge is a network device mainly operating at the data link layer of the OSI model with filtering and forwarding capabilities.

While Router is an internetworking device operating at the network layer of the OSI model. A router is attached to the two or more networks and forwards packets from one network to another.

A bridge is a networking device for connecting two segments of a network and transmitting data between them. Bridge operate in both the physical and the data link layers of OSI model. There is a compulsion of using identical protocols for the segments to communicate. The primary use of a bridge is to send, filter, or flood any arriving frame depending on the MAC address of that specific frame.

The frames can be transferred between two originally separate LANs by a bridge. However, bridges incorporate logic that permits them to retain the traffic for each segment separately. When a frame enters in a bridge interface, it checks the destination MAC address and forwards the late copy to the segment to which the address belongs. Bridges are also apparent to the end stations.

A router can be defined as a Network layer mechanism, be it software or hardware, using metrics to decide the best path to use for transmission of network traffic. A router is a device that routes or forward data from one network to other based on their IP address.

When Data packet is received from the router, the router inspects the data’s IP address and determines if the packet is meant for its own network then it receives the data, or if the data is for another network, then it transfers the data to the other network. It means that routers only forward the data if destination computer is the intended user.

Routers have access to network layer addresses and contain software that enables them to determine which of the several possible paths between those addresses is the best for the particular transmission. Routers break up broadcast and collision domains. It means broadcasts are not forwarded through the router, by default. It also provides connections for the virtual LANs (VLANs).

Key Differences Between Bridge and Router

Both bridge and router work on different layers of OSI model and differ in functionality too. But a router is more intelligent device than a bridge because routers can facilitate layer 2 bridging functions if required and can concurrently route through the same interface. Although it can not eliminate the use of bridge the reason is that it can not regenerate signals like a bridge.