A network is formed when two or more devices connect to share data or resources. A large network may need to be subdivided for efficient frame delivery or the traffic management. Bridges or switches are used to connect these subdivided segments of networks. In a long way, the terms bridge and switch are use interchangeably. Bridge and switch both provide the same functionality but the switch does it with greater efficiency.

A bridge connects smaller network segments to form a large network, and it also relays frame from one LAN to another LAN. On the other hand, the switch connects more network segments as compared to the bridges. This is a basic difference between bridge and switch. Let us compare the differences between the bridge and switch with the help of comparison chart shown below.

Bridge is a networking device used to connect the network segments of a large network. Bridge operates at two level i.e. physical layer and data link layer. Being a physical layer device, it regenerates the signal it receives. Here, it acts as a repeater.

The bridge being a data link layer device identifies the source and destination address of the frame it receives. It relays the frames between two separated LANs. On the other hands, the bridge also has the logic of filtering the traffic (separating the traffic of each network segment). 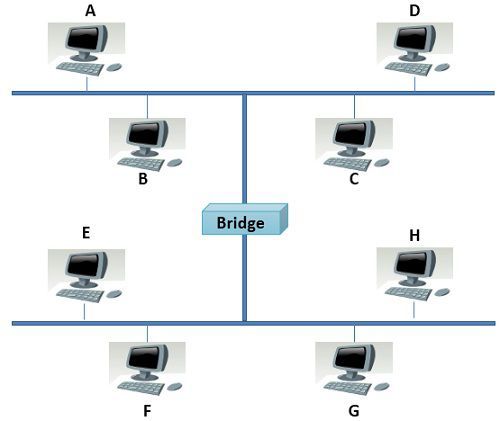 Bridge’s filtering capability can be explained with an example. You can observe the figure above, a bridge has joined two network segments. Now when station A sends a packet to station F, the packet arrives at the bridge. The bridge identifies that the intended recipient F is in the lower segment of the network. So, the bridge allows the packet to cross into the lower segment where the packet is received by the station F.

Further, we will discuss the types of bridges. Simple Bridge is the most primitive bridge which links two network segments. It has a single table which contains the address of each station included in both the segment.

Multiport Bridge, it links more than two network segments. It has the number of tables equal to the number of network segments it connects. Each table contains the addresses of all the station reachable from the corresponding port. Transparent Bridge is a bridge whose existence is not known to the stations. If a transparent bridge is added or removed from the system, the stations are not required to be reconfigured again.

This is all about the bridges now let us move to the Switches which are similar to the bridges. 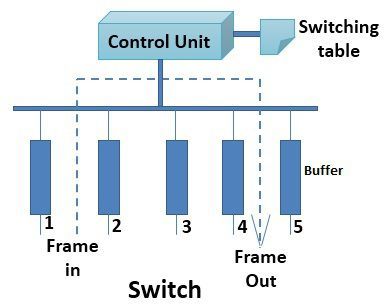 Key Differences Between Bridge and Switch

Bridges were introduced when the classic Ethernet was used hence they tend to join fewer networks. Switches are the modern bridges, and they tend to join comparatively more networks together and are more efficint than bridges.