The main purpose of VPN and Proxy is to provide a connection between the host computer and the remote computer by hiding host computer’s IP to make it secure against intruders.

The basic difference between VPN and Proxy is that a Proxy server allows to hide, conceal and make your network id anonymous by hiding your IP address. It provides features like Firewall and network data filtering, network connection sharing and Data caching. This first became popular where some countries tried to limit their citizen’s Internet access.

On the other hand, a VPN has benefits over the proxy by creating a tunnel over the public Internet between computers or hosts. A tunnel is formed by the encapsulation of the packets by any encryption protocol.

Encryption protocol such as Open VPN, IPsec, PPTP, L2TP, SSL and TLS, encrypts the data and adds a new header. This has helped companies to minimize the expenditures of leased lines and the high-speed routing services of the public internet to transfer data more securely.

VPN creates a network which is physically public but virtually private. The network is private because it ensures the organization privacy internally and virtual since it does not use actual private WANs. In addition, Virtual Private Network provides a mechanism for employing authentication, integrity protection including encryption.

VPN provides a highly secured connection, however, it does not need any specific cabling in the interest of the organization that wants to use it. Therefore, a VPN merges the benefits of a public network (cheap and easily available) with those of a private network (secure and reliable).

How a VPN works?

The idea of a VPN is easy to understand. Assume an organization has two networks, Network 1 and Network 2, which are physically separated from each other and we need to establish a connection between with them using the VPN concept. In such case, we install two firewalls, Firewall 1 and Firewall 2. Firewalls perform the encryption and decryption. Now, lets us understand how the VPN guard the traffic moving between any two hosts on the two different networks. 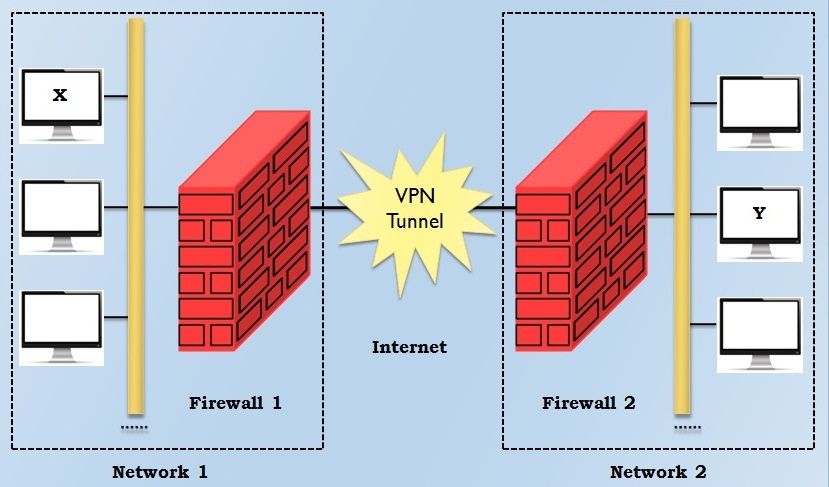 For this, suppose host X on Network 1 require to send a data packet to host Y on Network 2. This transmission would work as follows.

A proxy server is a computer or software which behaves as an intermediary between the client and actual server. It usually hides the client’s IP and uses the anonymous network ID for connecting to the network. Proxy servers decide the flow of application traffic level and perform network data filtering, network connection sharing and data caching.

How a proxy servers works?

Proxy servers are highly secured as compared to packet filters. Its reason is that here we simply detect whether a user is allowed to work with a TCP/IP application or not instead of examining every packet against several rules. The demerit of a proxy server is the overhead regarding the number of connections.

Key Differences Between VPN and Proxy

Both VPN and Proxy serves almost the same purpose, but a VPN provides more security than a proxy server.