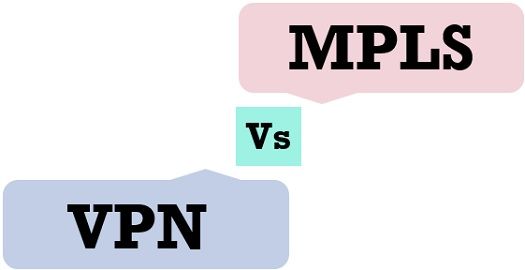 The MPLS and VPN are the acronyms majorly used in networking, where both intend to perform different functions. The significant difference between MPLS and VPN is that the MPLS is used for generating a predetermined route with the help of labels that behaves like circuit-switched connection, but it can deliver layer 3 IP packets also. On the other hand, the VPN establishes a secure encrypted connection with the help of an additional server for delivering the information.

Furthermore, the MPLS can make a router work like a switch because there is no restriction of sending the IP packet. It also works fine with the non-IP packet. Conversely, the VPN has the capability to hide the user’s IP address and change its location.

MPLS expands to Multi-protocol Label Switching which is an important data-carrying mechanism. Its features are quite similar to the circuit-switched and packet-switched network where it emulates some of the features of a circuit-switched network on the packet-switched network. It uses the mechanism of label switching in which each packet is assigned with a label or number. The labels or number facilitates the packet forwarding process. In a path, labels are correspondent to the layer-3 destination addresses, as it is analogous to IP destination-based routing.

The primary intent for devising the MPLS is to make the forwarding of the protocol supportable other than TCP/IP protocol. So, due to this reason, the label switching function, in the same way, disregarding to the layer-3 protocol. When the MPLS is implemented in a large scale network, then only edge routers are responsible for conducting routing-lookup, and the core routers forward packets in accordance with the label. It increases the overall speed of the packet forwarding in the service provider network.

One of the main advantages of the MPLS is that MPLS header is not a component of the network layer packet or data link layer frame. It does not rely on either of the two layers – network layer and data link layer. This brings the concept of the MPLS switches that are capable of forwarding both IP and non-IP packets, and this is the reason it is named as “multi-protocol”.

The VPN (Virtual Private Network) is a type of network which is private but virtual. Now, how is it a private and virtual network? It is considered as private because it assures the privacy inside the organization and virtual because it does not employ the private WANs. In simple words, the network is physically public but virtually private.

This type of Virtual Private Network is responsible for securely transferring the information over a public network. It uses encryption techniques over the traffic so that the data is kept confidential. In order to accomplish this transfer of data with the help of secure virtual tunnel, the IPsec is implemented instead of the leased line.

VPN is advantageous because it is entirely transparent among the user softwares. It makes sure that the user’s location stays private and it also encrypts data so that the user can anonymously surf the web.

Key Differences Between MPLS and VPN

The MPLS and VPN are the different technology and works on a different concept. However, in both techniques, a dedicated route or path is established but for accomplishing distinct tasks. The purpose of MPLS is to assist the forwarding of the non-TCP/IP packets by routers. As against, the chief role of the VPN is to provide a secure connection over a public network.