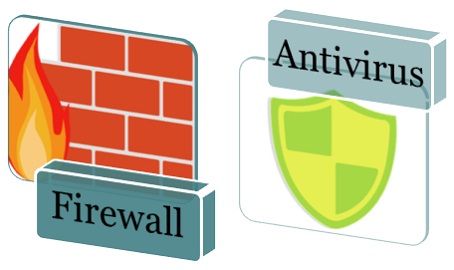 Firewall and antivirus are the mechanisms to provide the security to our systems. Although the vulnerabilities are different in both cases. The major difference between Firewall and Antivirus is that a Firewall acts as a barrier for the incoming traffic to the system. Conversely, Antivirus protects against the internal attacks like malicious files etc.

Both Firewall and Antivirus functions on different approaches like Firewall emphasizes on inspection of the data flowing from the internet to computer. In contrast, an Antivirus emphasizes on the malicious program inspection steps such as Detection, Identification and Removal.

A firewall can be considered as a standard approach which protects local computer assets from external threats. A firewall is designed to filter out the IP packets that are coming from the network to the computer. It is also an effective way to protect the local system as well as against the network, and simultaneously you can access internet or wide area network.

Characteristics of a firewall

An antivirus is an application software which provides security against the malicious programs coming from the internet. However, it is extremely hard or next to impossible to prevent them altogether from the world connected to the internet.

The antivirus follows an approach in which it performs detection, identification and removal.

If the detection is successfully completed and it is not possible to perform the identification and removal, in that case, Antivirus discard the infected file and reload the infection-free backup version.

Various generations of Antivirus has evolved due to improvement in the viruses and antivirus technology. Earlier this was not the scenario before viruses were simple code fragments that were identified and removed easily.

Generations of the antivirus

Key Differences Between Firewall and Antivirus

Firewall and Antivirus both seemingly similar that provides a mechanism to protect a computer from external and internal threats. Although the type of attack may differ in both cases.

A firewall prevents untrusted and unauthorized programs to gain access to communicate with the computer, but it does not perform detection, identification and removal. Rather it restricts and blocks incoming/outgoing traffic from reaching the computer. On the other side, Antivirus detect, identify and remove the malware (malicious program) from the computer.