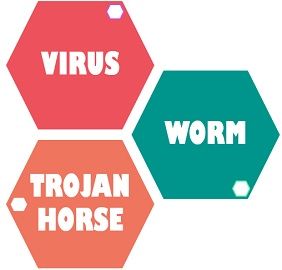 The prior difference between virus, worm and trojan horse is that a virus attaches itself to a program and propagates copies of itself to other programs followed by a human action, while the worm is a solitary program that spreads its copies to other components without modifying it. Whereas a Trojan horse is a program containing an unexpected supplementary functionality.

A virus can be defined as a piece of program code that attaches itself to a permissible program in order to infect it. The virus runs when the legitimate program runs and can perform any function such as deleting a file. The primary operation performed in a virus is that when an infected program is executed it will first execute the virus and then the original program code will execute. It is capable of infecting other programs residing on that computer.

After corrupting all files from the current user’s computer, the virus propagates and send its code through the network to the users whose email address is stored in the current user’s computer. Specific events can also be used to trigger a virus. There are various types of virus such as parasitic, boot sector, memory resident, polymorphic, stealth and metamorphic. The virus infection can be prevented by preventing the entry of a virus.

A worm is a program that can replicate itself and send copies from computer to computer like a virus, but it is different in implementation. It does not modify a program rather it is activated upon arrival to replicate and propagate again. The excessive replication result in halting the system, it consumes system resources to bring it down. A worm vigorously searches for more machines to corrupt, and corrupted machine behaves as a worm producing machine for the other machines connected to it.

Network worm programs utilize network connections to spread from system to system, in the following case the network vehicles could be electronic mail facility, remote execution capability and remote login capability to drive the replication.

A trojan horse is a hidden piece of code which when executed, performs some unwanted or harmful function similar to virus. These are used to fulfil a function directly that an unauthorised user could not achieve. For example, the trojan horse could hide its code in a login form by attaching to it. When a user inserts its details trojan send this information to the attacker without the knowledge of the user. Then the attacker can use the user details to gain access to the system.

Another motive of trojan horse can be data destruction. The program appears to be executing a useful function but it may be silently executing destructive functions.