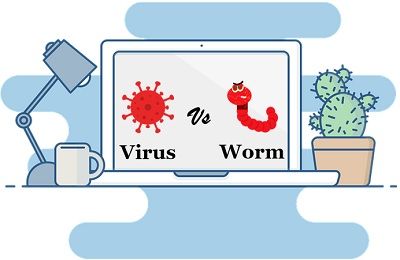 Virus and Worms are malware that is usually created to steal crucial information from the victim’s computer. These are the malicious programs, which enter our computers through CDs, Pen drives, email attachments and the files we download from the Internet. The major difference between the virus and worms is that a virus spreads only when the user opens the infected program whereas the worms spread by replicating themselves to the computers connected to the network.

A class of software that we refer to as malware can be classified into two broad categories:


What is Virus in Computer?

Once the virus has infected your system it can progressively infect the other system on the same network. A virus usually carries its instructional code that alters the way the computer operates. The instructional code of the virus also contains the instructions for spreading from one computer to another. However, the damage it causes could be recovered if good backup and recovery procedures are employed.

Symptoms of Virus in Computer

All Viruses are Man-Made and aim to harm the target computer.

What is Worm in Computer?

Worms can invade your computer due to some software vulnerabilities or they might come as an attachment to an email. More often the worm uses a computer network to spread. When the user opens this file it can either link you to some malicious website or it may automatically download a worm to your computer. Once the worm is installed in your system it starts replicating itself in the disguise of system files and infects your entire computer without your knowledge.

How does the worm affect your Computer?

The major goal of most computer worms is to self multiply themselves repeatedly, thereby consuming the system resources such as hard drive space, the bandwidth of your system, and overloading the shared network. Thus the worm reduces the overall speed of your system. In addition to this, worms can even steal your system’s data or allow hackers to gain access to your system settings.

The computer worms could spread in the following manner:

Key Difference Between Virus And Worms

Protection against Virus and Worms

Virus and Worms are malware types that are mainly designed to damage your system or breach your system’s security. Although, the severity of damage could differ in both viruses and Worms. The virus includes modification in file or program while worms don’t commit any changes in file or program; instead, it replicates themselves again and again.