RPC and RMI are the mechanisms which enable a client to invoke the procedure or method from the server through establishing communication between client and server. The common difference between RPC and RMI is that RPC only supports procedural programming whereas RMI supports object-oriented programming.

Remote Procedure Call (RPC) is a programming language feature devised for the distributed computing and based on semantics of local procedure calls. It is the most common forms of remote service and was designed as a way to abstract the procedure call mechanism to use between systems connected through a network. It is similar to IPC mechanism where the operating system allows the processes to manage shared data and deal with an environment where different processes are executing on separate systems and necessarily require message-based communication.

Let’s understand how RPC is implemented through the given steps:

Remote Method Invocation (RMI) is similar to RPC but is language specific and a feature of java. A thread is permitted to call the method on a remote object. To maintain the transparency on the client and server side, it implements remote object using stubs and skeletons. The stub resides with the client and for the remote object it behaves as a proxy.

When a client calls a remote method, the stub for the remote method is called. The client stub is accountable for creating and sending the parcel containing the name of a method and the marshalled parameters, and the skeleton is responsible for receiving the parcel. 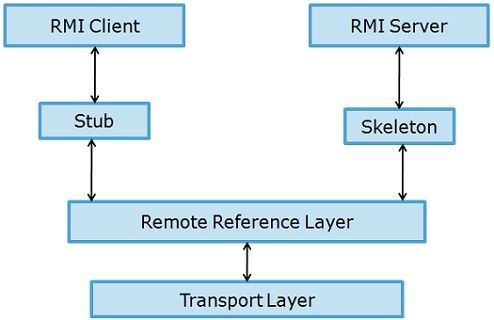 In Java, the parameters are passed to methods and returned in the form of reference. This could be troublesome for RMI service since not all objects are possibly remote methods. So, it must determine which could be passed as reference and which could not.

Key Differences Between RPC and RMI

Both RPC and RMI serves the same purpose but are used in languages support different programming paradigms, therefore have distinct features.