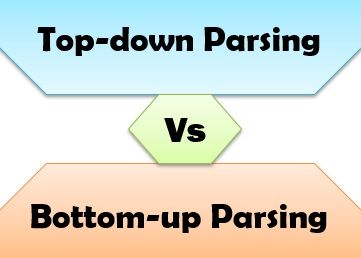 Before understanding the types of parsing, we must know what is parsing and why it’s done. Parsing is the technique of examining a text containing a string of tokens, to find its grammatical structure according to the given grammar.

Now, let us discuss the responsibilities of a parser. The parser receives a string of token from the lexical analyser. When the string of tokens can be generated by the grammar of the source language, then the parse tree can be constructed. Additionally, it reports the syntax errors present in the course thing. After this, the generated parse tree is transferred to the next stage of the compiler.

In Top-down parsing, we know that the parse tree is generated in the top to bottom fashion (i.e. from root to leaves). It derives the leftmost string and when the string matches the requirement it is terminated. The top-down parsing is mainly intended to discover the suitable production rules to generate the correct results.

We will understand the top-down parsing process using an example, where the considered grammar is given below:

Assume that the input string is “xyz” as shown below, the parse tree of the given input string is generated using the above-given grammar by the following steps of the top-down approach.

The Bottom-up parsing method is just inverse of top-down where the input string is taken in the first place and then the string is reduced using the grammar. In this process the start symbol is acquired at the end of the process then it halts. As mentioned above the tree is constructed from leaves to the root, and the input symbols are located at the leaf nodes after successful execution of the parsing method.

We have used the term reduction what is actually means? The parser in the process attempts to recognise the RHS of production rule and substitute the corresponding LHS on it, this is known as reduction. Thence, the bottom-up parse tree is constructed from the end leaves, the leaves are further reduced to the internal nodes, and internal nodes are reduced to the root node, as shown in the below-given equation.

Let us assume the token stream is “a+b” whose parse tree is constructed according to the below-given grammar.

These conditions could hamper the construction of the parser.

The parsing methods top-down and bottom-up are differentiated by the process used and type of parser they generate such as the parsing which starts from the roots and expands to the leaves is known as top-down parsing. Conversely, when the parse tree is built from leaves to root then it is bottom-up parser.