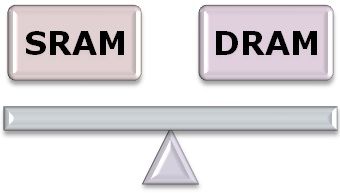 SRAM and DRAM are the modes of integrated-circuit RAM where SRAM uses transistors and latches in construction while DRAM uses capacitors and transistors. These can be differentiated in many ways, such as SRAM is comparatively faster than DRAM; hence SRAM is used for cache memory while DRAM is used for main memory.

RAM (Random Access Memory) is a kind of memory which needs constant power to retain the data in it, once the power supply is disrupted the data will be lost, that’s why it is known as volatile memory. Reading and writing in RAM is easy and rapid and accomplished through electrical signals.

SRAM (Static Random Access Memory) is made up of CMOS technology and uses six transistors. Its construction is comprised of two cross-coupled inverters to store data (binary) similar to flip-flops and extra two transistors for access control. It is relatively faster than other RAM types such as DRAM. It consumes less power. SRAM can hold the data as long as power is supplied to it.

Working of SRAM for an individual cell: 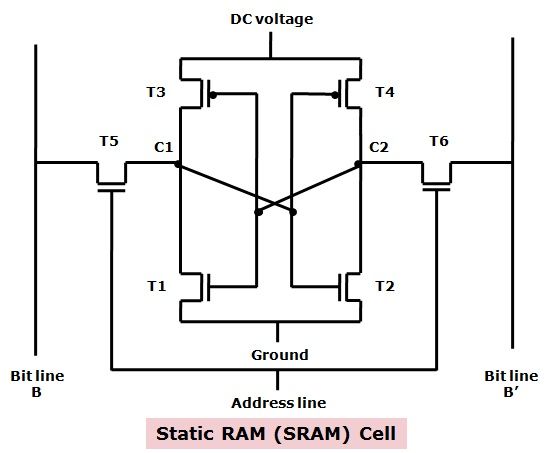 DRAM (Dynamic Random Access Memory) is also a type of RAM which is constructed using capacitors and few transistors. The capacitor is used for storing the data where bit value 1 signifies that the capacitor is charged and a bit value 0 means that capacitor is discharged. Capacitor tends to discharge, which result in leaking of charges.

The dynamic term indicates that the charges are continuously leaking even in the presence of continuous supplied power that is the reason it consumes more power. To retain data for a long time, it needs to be repeatedly refreshed which requires additional refresh circuitry. Due to leaking charge DRAM loses data even if power is switched on. DRAM is available in the higher amount of capacity and is less expensive. It requires only a single transistor for the single block of memory.

When the address line is chosen for executing read operation, the transistor turns on and the charge stored on the capacitor is supplied out onto a bit line and to a sense amplifier. 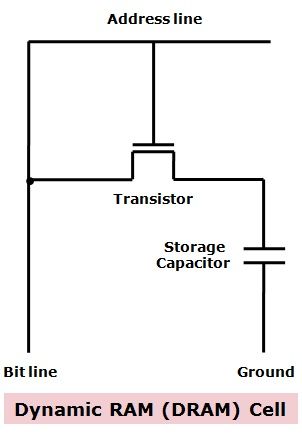 The sense amplifier specifies whether the cell contains a logic 1 or logic 2 by comparing the capacitor voltage to a reference value. The reading of the cell results in discharging of the capacitor, which must be restored to complete the operation. Even though a DRAM is basically an analog device and used to store the single bit (i.e., 0,1).

Key Differences Between SRAM and DRAM

DRAM is descendent of SRAM. DRAM is devised to overcome the disadvantages of SRAM; designers have reduced the memory elements used in one bit of memory which significantly reduced the DRAM cost and increased the storage area. But, DRAM is slow and consumes more power than SRAM, it needs to be refreshed frequently in few milliseconds to retain the charges.