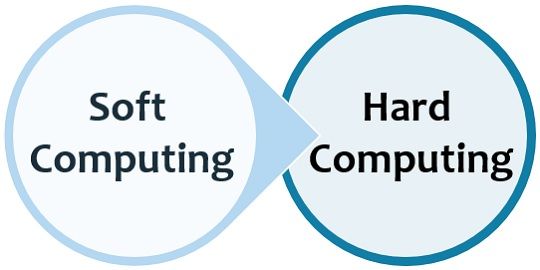 Before understanding soft computing and hard computing we should understand, what is computing? The computing in terms of computer technology is the process of accomplishing the particular task with the help of a computer or a computing device. There are several characteristics of the computing like it should provide precise solution, accurate and clear control actions, facilitate the solution of the problems that can be solved mathematically.

The traditional computing method, hard computing is suitable for mathematical problems, although it might be used to solve real-world problems, but the major associated demerit is that it consumes a large amount of computation time and cost. This is the reason the soft computing is the better alternative for solving the real world problems.

Soft computing is a computing model evolved to solve the non-linear problems which involve uncertain, imprecise and approximate solutions of a problem. These types of problems are considered as real-life problems where the human-like intelligence is required to solve it. The soft computing term is coined by Dr Lotfi Zadeh, according to him, soft computing is an approach which imitates the human mind to reason and learns in an environment of uncertainty and impression.

It is created through two elements adaptivity and knowledge and has a set of tools such as fuzzy logic, neural networks, genetic algorithm, etcetera. The soft computing model is distinct from its antecedent model known as hard computing model because it does not work on the mathematical model of problem-solving.

Now, let us discuss some of the methodologies of the soft computing with examples.

1. Fuzzy logic deals with the decision making and control system problems which can not be converted into hard mathematical formulae. This basically maps the inputs to the outputs logically in a non-linear manner, the way humans does it. Fuzzy logic is used in automobile subsystem, air conditioners, cameras, etcetera.

2. Artificial neural networks perform classification, data mining and prediction process and easily manage the noisy input data by categorising it into the groups or mapping to an expected output. For example, it is used in the image and character recognition, business forecasting where the patterns are learnt from the data sets and a model is created to recognize these patterns.

3. Genetic algorithms and evolutionary techniques are employed to solve the optimization and designs related problems where an optimal solution can be recognized but no predefined correct answer would be provided. The real-life applications of the genetic algorithm which uses heuristic search techniques are robotics, automotive design, optimised telecommunication routing, biomimetic invention, and so on.

Hard computing is the traditional approach used in computing which needs an accurately stated analytical model. It was also proposed by Dr Lotfi Zadeh before soft computing. Hard computing approach produces a guaranteed, deterministic, accurate result and defines definite control actions using a mathematical model or algorithm. It deals with binary and crisp logic which require the exact input data sequentially. However, hard computing is not capable of solving the real world problems whose behaviour is extremely imprecise and where the information changes consistently.

Let’s take an example if we need to find whether it will rain today or not? The answer could be yes or no, which means in two possible deterministic way we can answer the question or in other words, the answer contains a crisp or binary solution.

The conventional computing approach hard computing is effective when it comes to solving a deterministic problem, but as the problem grows in size and complexity, the design search space also increases. This made difficult to solve an uncertain and imprecise problem by hard computing. So, soft computing has emerged as the solution to the hard computing which also provides a lot benefits such as fast computation, low cost, elimination of the predefined software, etcetera.