The RJ (Registered Jack) connectors, RJ45 and RJ11 are prevalent connectors used with the UTP (Unshielded Twisted Pair) cables. These connectors can be differentiated by their size, the number of pin and structure where RJ45 has a larger size and number of pins as compared to the RJ11 connector.

RJ45 and RJ11 are the very common RJ ports which are used for different purposes, RJ45 is newer, modular, self-securing and compact technology used for connecting the ethernet cables to different electronic devices. Conversely, RJ11 is used to terminate the conventional PSTN telephone networks.

The RJ45 is an 8 pin connector used to attach the ethernet interfaces. It is known as an 8P8C connector, which means that it contains 8 pin positions among which all of them are connectable. RJ45 describes the physical structure of the connector and how the links are wired from one end to the other.

The RJ45 connectors are used to link the Ethernet networks, it is signified by your ethernet NIC (Network Interface Controller) which have an RJ45 jack on it. We can not use coaxial connectors (RG6 and RG11) and non-modular connector DB25, instead, RJ45 is utilized by several network interface controller cards for attaching to networks like Ethernet. It falls in the class of category 5 cables, However; RJ45 does not match the TIA standard and said to be incorrect with respect to a generic 8P8C connector.

The RJ45 connector has 8 pins which are connected to the 8 coloured wires grouped into four pairs. Here, four wires (two pairs) are intended to carry the voltage and others are referred to as tip which is grounded. The connector is crimped over the end of the wire and the pin positions are numbered from the left 8 to 1.

TIA/EIA has defined two techniques for injecting the twisted pair cables into RJ45 plugs – 568A and 568B. If these standards are followed in a correct manner then the data can be accurately transferred. The below-given diagram a and b illustrates the pin numbers and assignments for TIA/EIA 568A and TIA/EIA 568B respectively. 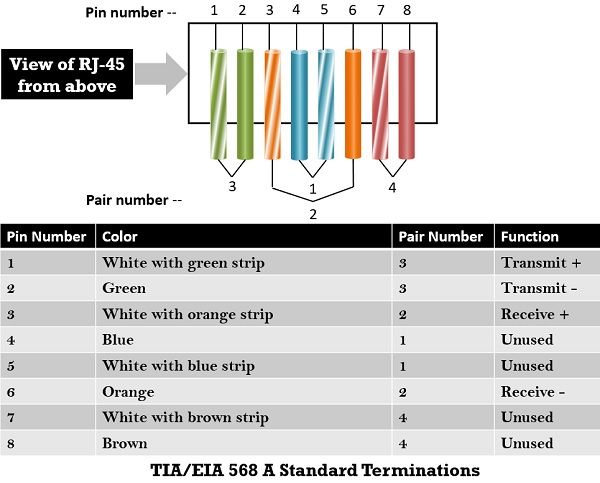 The networking experts consider the configuration shown in the diagram a and b as transmit and receive. Traditionally, the T and R designation stands for tip and ring which are used when the RJ11 connectors are used to terminate old telephone lines. 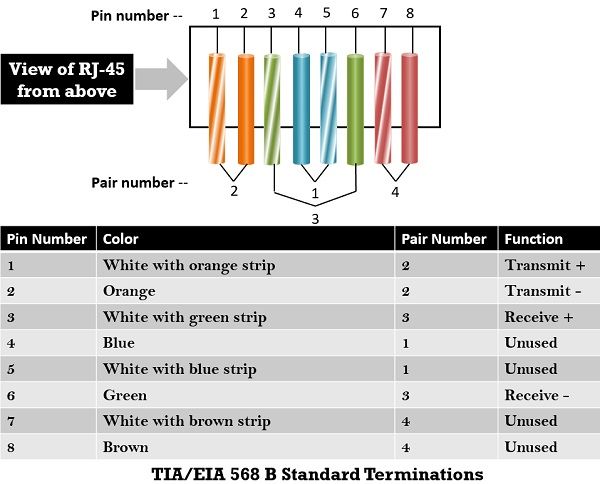 Types of cables based on the termination

RJ11 is a four pins connector which is used for terminating the telephone wires. The other application of RJ11 is that it was also used with analog telephony and modems connected with computer serial ports to transfer modulated digital information using PSTN (Public Switched Telephone Network).

The other two remaining contacts from the two tip and ring contacts are used as a ground for selective ringers to avoid ringing of the bell over the other extensions through pulse dialling phones.

Key Differences Between RJ45 and RJ11

The RJ45 and RJ11 are the connectors commonly used in telecommunication where RJ45 is larger and used in Ethernet networks. As against, RJ11 connector is smaller in size and whose interface is used with the single line POT telephone networks.