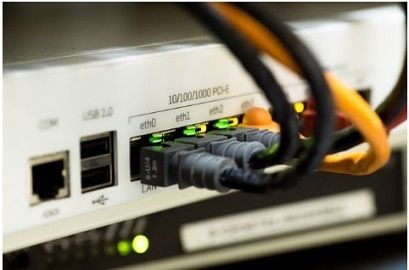 The fast Ethernet was devised under the name of 802u to contend for LAN protocol FDDI. It is completely based on 10-Base-T ethernet as it is a successor of 10-Base-T Ethernet. It was popular because it is simple to implement, manage and maintain. The fast ethernet has the advantage of backward compatibility. It is ten times faster than its successor and is capable of providing data speed of 100 Mbps. There are three varieties of fast ethernet – 100Base-T4, 100Base-Tx and 100Base-Fx.

MAC layer of fast ethernet is different from the standard ethernet where the data rate and collision domain are altered. The data rate is incremented by the factor of 10 and collision rate is decremented by the factor of 10. Although, there exhibit no change in frame format, then how did it achieve ten times faster speed without changing frame format? To accomplish this, the RTT (Round trip time) has reduced from 57.6 to 5.76 microseconds.

The time needed for a signal pulse or a packet to traverse from a certain source to a particular destination and return from there again is known as Round trip time or Round-trip delay.

The Gigabit Ethernet was devised to provide a higher rate of transmission up to 1 Gbps. The prior intention was to develop a technology that can properly work on existing networking equipment. It is constructed on the top of the Ethernet protocols such as CSMA/CD. Both the modes full duplex and half duplex are supported by it, similar to fast ethernet.

In the beginning single-mode, multi-mode fibre and short-haul coax cable are used. After that, twisted pair cable standards were also included. Gigabit rates are achieved by using physical channel technology as a standard over the optical fibres.

The important improvements or changes in Gigabit Ethernet from its predecessor are depicted below: