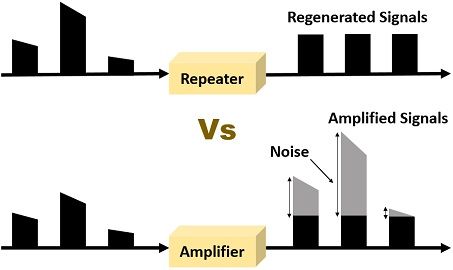 Repeater and Amplifier both are electronic devices used for enhancing the power of the transmitted signal. The prior difference between them is that repeater is used as a regenerator of the signal which also eliminates the noise from the signal. On the other hand, amplifier just enhances the amplitude of the signal waveform and does not care about the noise that is being amplified along with the signal.

A repeater is an electronic device which functions only on the physical layer of the OSI model. When the data is transmitted across the network, it is carried by the signals from one host to another. The signals carrying the information can travel for a fixed distance in the network because as the signal travels it experiences a loss or attenuation which can result in loss of information and a part of information.

Attenuation is generated because the medium through which signal is travelling produces some sort of resistance. So, to overcome the attenuation problem, a repeater is installed on a link that receives the signal before the signal reaches its limits or becomes extremely week. The repeater listens the incoming signal and regenerates the original bit pattern not the noise and retransmits the refreshed signal into the network.

An amplifier is also an electronic device, whose purpose is to increase the amplitude of the signal waveform without altering the other parameters like frequency or wave shape. It is one of the most pervasively used circuits in electronics and can be used for various functions. Amplifiers are usually used in wireless communication.

Unlike repeater, an amplifier is not able to generate original bit pattern it just amplifies the whatever is fed into it because it cannot discriminate between the intended signal and the noise. In other words, even if an incoming signal is corrupted and contain some noise the amplifier just enhance the amplitude of the signal despite correcting the corrupted signal.

Key Differences Between Repeater and Amplifier

An amplifier is a part of a repeater. Amplifier enhances the amplitude of the signal regardless of the noise contained in that signal inversely repeater regenerates the signal, bit by bit using the input signal and removes the noise exhibit in the signal.