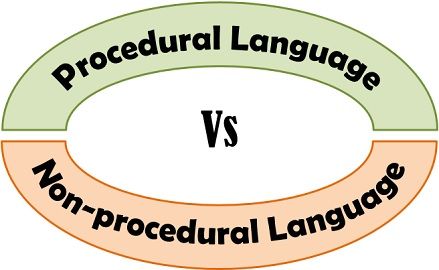 Furthermore, procedural programming languages perform computation as a sequence of statements that manipulate stored data until the desired result is achieved. In contrast, the nonprocedural language represents programs as relationships between mathematical expressions which are based on dependencies.

As mentioned above the procedural language is command-oriented, or we can say alternatively statement-oriented language. The fundamental unit of procedural programming is an action which is further divided into three parts – computational actions (for example arithmetic operations), control-flow actions (like comparison and looping statements), and input-output actions (such as read and write operations).

All the procedural actions can access common storage, containing an arbitrary number of memory locations. These memory locations can be classified in the states like occupied, undefined or unused. So, here the primary concept is the machine state, which is the group of all values for all memory locations in the computer.

Nonprocedural language also known as applicative or functional language involves the development of the functions from other functions to construct more complex functions. These functions work in levels where the initial set of data is manipulated then the final functions are used to find the outcome from the initial data.

LISP and ML are the nonprocedural languages.

Features of a nonprocedural programming language: