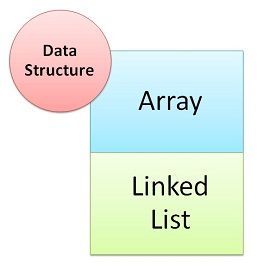 The major difference between Array and Linked list regards to their structure. Arrays are index based data structure where each element associated with an index. On the other hand, Linked list relies on references where each node consists of the data and the references to the previous and next element.

Basically, an array is a set of similar data objects stored in sequential memory locations under a common heading or a variable name.

While a linked list is a data structure which contains a sequence of the elements where each element is linked to its next element. There are two fields in an element of linked list. One is Data field, and other is link field, Data field contains the actual value to be stored and processed. Furthermore, the link field holds the address of the next data item in the linked list. The address used to access a particular node is known as a pointer.

Another significant difference between an array and linked list is that Array has a fixed size and required to be declared prior, but Linked List is not restricted to size and expand and contract during execution.

An array is defined as a set of a definite number of homogeneous elements or data items. It means an array can contain one type of data only, either all integers, all floating-point numbers, or all characters. Declaration of an array is as follows:

Where int specifies the data type or type elements array stores. “a” is the name of an array, and the number specified inside the square brackets is the number of elements an array can store, this is also called size or length of the array.

Let us look at some of the concepts to be remembered about arrays:

The following program illustrates the reading and writing of the array.

Linked list is a particular list of some data elements linked to one other. In this every element point to the next element which represents the logical ordering. Each element is called a node, which has two parts.

INFO part which stores the information and POINTER which points to the next element. As you know for storing address, we have a unique data structures in C called pointers. Hence the second field of the list must be a pointer type. 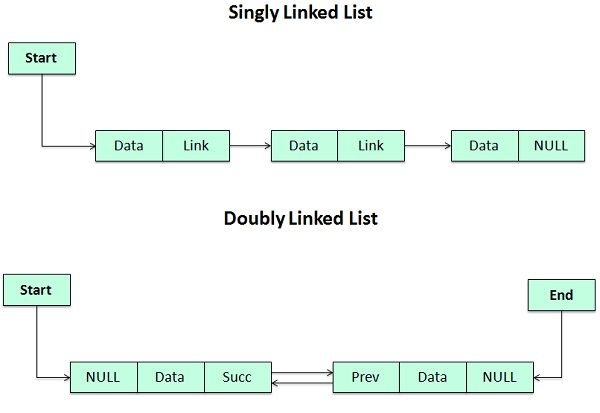 The following snippet illustrates the creation of a linked list:

Array and Linked lists are the types of data structures differ in their structure, accessing and manipulation methods, memory requirement and utilization. And have particular advantage and disadvantage over its implementation. Consequently, either one can be used as per need.