UMA (Uniform Memory Access) system is a shared memory architecture for the multiprocessors. In this model, a single memory is used and accessed by all the processors present the multiprocessor system with the help of the interconnection network. Each processor has equal memory accessing time (latency) and access speed. It can employ either of the single bus, multiple bus or crossbar switch. As it provides balanced shared memory access, it is also known as SMP (Symmetric multiprocessor) systems. 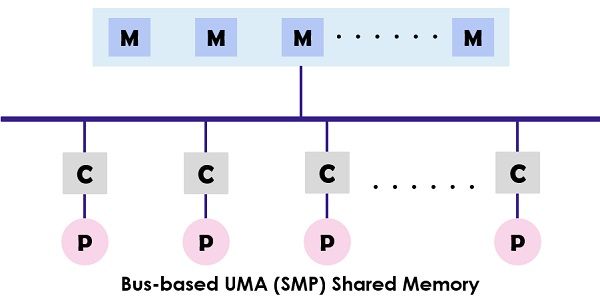 The typical design of the SMP is shown above where each processor is first connected to the cache then the cache is linked to the bus. At last the bus is connected to the memory. This UMA architecture reduces the contention for the bus through fetching the instructions directly from the individual isolated cache. It also provides an equal probability for reading and writing to each processor. The typical examples of the UMA model are Sun Starfire servers, Compaq alpha server and HP v series.

NUMA (Non-uniform Memory Access) is also a multiprocessor model in which each processor connected with the dedicated memory. However, these small parts of the memory combine to make a single address space. The main point to ponder here is that unlike UMA, the access time of the memory relies on the distance where the processor is placed which means varying memory access time. It allows access to any of the memory location by using the physical address. 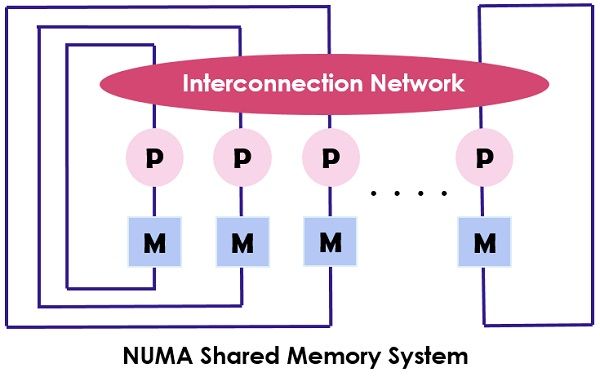 Key Differences Between UMA and NUMA

The UMA architecture provides the same overall latency to the processors accessing the memory. This is not very useful when the local memory is accessed because the latency would be uniform. On the other hand, in NUMA each processor had its dedicated memory which eliminates the latency when the local memory is accessed. The latency changes as the distance between the processor and memory changes (i.e., Non-uniform). However, NUMA has improved the performance as compared to UMA architecture.